This is a massive defeat for President Barack Obama’s administration and we couldn’t be happier for the rancher that took him on:[1] 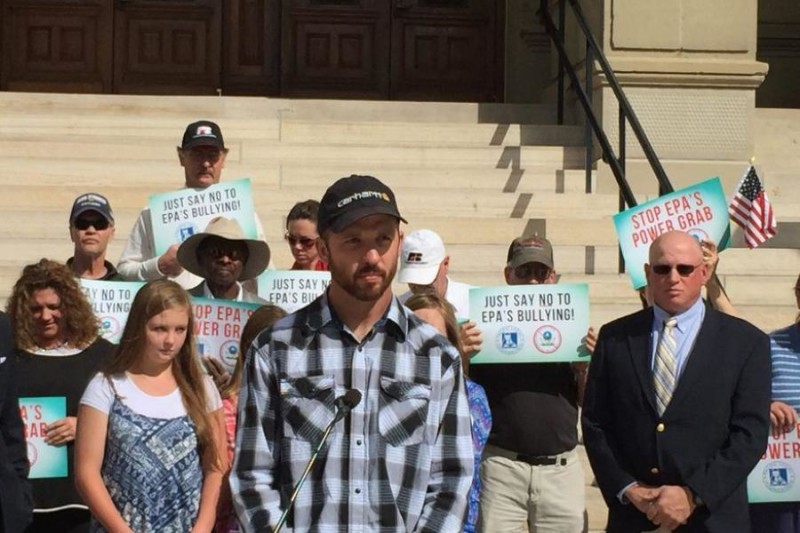 Without the drama of the Oregon stand-off, a Wyoming rancher fought back against the intrusive federal government and won.

Andy Johnson was threatened with millions in fines by Obama’s Environmental Protection Agency (EPA) for a pond he created on his own land and at his expense.

The battle has been ongoing for years as Johnson obtained a state permit to dam a small creek that runs through his 8-arce property.

The EPA didn’t approve and tried to stop him using the Clean Water Act, even though it was an independent pond not connected to a larger body of water. Johnson took the Obama administration to court and a settlement was just reached.

A Wyoming rancher threatened by the Environmental Agency with $16 million fines for getting a state permit and building a stock pond on his ranch has reached a settlement that will have the fines go away and he’ll keep his stock pond.
WND reported in 2015 on a lawsuit filed on behalf of Fort Bridger, Wyoming, rancher Andy Johnson by officials with the Pacific Legal Foundation seeking to vindicate his property rights.

The lawsuit explained federal law clearly exempts stock ponds from the rules of the EPA, which had filed a compliance order against him threatening $37,500 in fines per day – which already at the time of the filing had passed $16 million.

Now, officials the PLF has announced the federal government has agreed to resolve the case, and a federal court has approved.

“Importantly, under the settlement, the Johnson family’s pond will remain; they won’t pay any fines; they don’t concede any federal jurisdiction to regulate their pond; and the government won’t pursue any further enforcement actions based on the pond’s construction,” the legal team revealed.

“This is a victory for common sense and the environment, and it brings an end to all the uncertainty and fear that the Johnson family faced,” said Jonathan Wood, a staff attorney with Pacific Legal Foundation.

Congrats on sticking it to Obama, Mr. Johnson! You deserve the victory!