The United Nations hasn’t made it a secret that they don’t like guns.  In December of last year, the UN proposed a treaty to reduce small arms trade in an effort to eliminate gun violence.  After all, UN treaties and action are so wildly successful (warning: sarcasm).  Two United States Senators have decided to take action in defeating the treaty and defunding any action by the UN on gun control.[1] 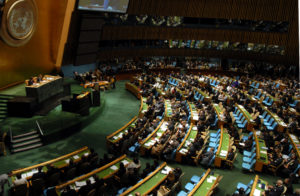 Inhofe is angry that the deal contains no guarantees for personal gun owners and feels the deal could effect the United States’ ability to assist their allies.

“Inhofe was also able to add an amendment to shut down the United Nations Arms Trade Treaty at a vote of 59 to 41. Inofe’s amendment was written so that if the U.N. passes the Arms Trade Treaty, then Congress can stop all funding to any part of the U.N. that would support the enforcement and implementation of the treaty.”

I wonder if the next UN resolution will be about the Obama Administration’s gun-running programs to Mexican Drug Cartels?