British troops are banned from SHOUTING at insurgent terror suspects

Is this for real? British soldiers have been banned from shouting at insurgent terror suspects, banging their fists on tables or walls, or using ‘insulting words’ in new ‘soft-touch’ rules for interrogation. 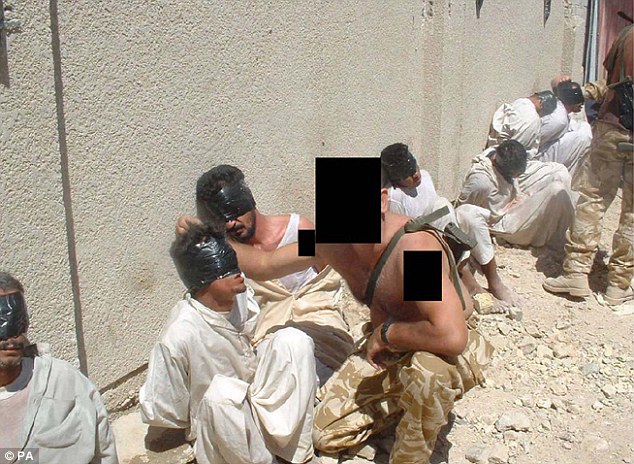 British soldiers have been banned from shouting at insurgent terror suspects, banging their fists on tables or walls, or using ‘insulting words’ in new ‘soft-touch’ rules for interrogation.
Military chiefs have warned that troops are ‘no longer able’ to carry out tactical questioning, placing the lives of soldiers at serious risk.
The revised ‘Challenge Direct’ regulations were introduced after Iraqi detainee Baha Mousa died in custody with 93 injuries after being kicked and punched by soldiers in Basra.
But there is said to be growing concern within the ranks as troops believe the latest rules are so strict that it makes interrogation pointless.
This comes days after it emerged that the CIA subjected detainees to controversial torture techniques including waterboarding, ‘rectal feeding’ and sleep deprivation.
Despite the global outrage, British military chiefs still fear the current restrictions on interrogators could hinder the gathering of vital information which could prevent terrorist attacks.
There is also growing concern that soldiers could be exposed to legal claims and possible disciplinary action as the rules are so easily breached.
Colonel Tim Collins, a retired Northern Irish military officer, said the rules on interrogations have been tightened up because of the lawyers since he left the British Army.
‘The effect of the ambulance-chasing lawyers and the play-it-safe judges is that we have got to the point where we have lost our operational capability to do tactical questioning. That in itself brings risks to the lives of the people we deploy,’ he told The Telegraph.
‘These insurgents are not nice people. These are criminals. They behead people; they keep sex slaves. They are not normal people.’
The previous policy – known as ‘Harsh’ – allowed soldiers to show ‘psychotic tendencies’, and aim ‘personal abuse’ at a captive who could be ‘taunted and goaded’.
They were permitted to ‘shout as loud as possible [with] uncontrolled fury’ at a captive.
The legality of these techniques were brought into question after the death of Baha Mousa, as the innocent civilian was found to have suffered an ‘appalling episode of serious gratuitous violence’.
An inquiry into his death, published in 2011, disclosed that he had been subjected to sustained beatings by soldiers from 1st Battalion the Queen’s Lancashire Regiment in September 2003.
The new guidelines have restricted the use to shouting to a couple of seconds at a time – and is only meant to gain a captive’s attention.
But these were challenged once again after Iraqi national Haidar Ali Hussein sued the Ministry of Defence saying it should ban soldiers from shouting or making ‘stern comments’ to detainees.
Although Mr Hussein’s detention predated the new policy, his legal team argued the technique which involves ‘shouting or screaming in a detainee’s face’ – breaches the Geneva Convention.
The Court of Appeal threw out Mr Hussein’s challenge – but in doing so disclosed how the technique works and when it can be applied.
Lord Justice Lloyd Jones and two fellow Court of Appeal judges ruled the Challenge Direct policy lawful as it did not ‘involve any violation of the duty of humane treatment’.
But they found a number of breaches, including an interrogator who ‘slammed the desk with his hand’ and one who ‘slammed the wall with his hand’.
Defence Secretary Michael Fallon, the Defence Secretary, has said he is concerned about the rising cost of legal cases and the scrutiny on British troops.
‘What’s important for us is to understand the legal scrutiny that we are under all the time now, the cases that are being brought sometimes spuriously by law firms representing people who claim they were wrongly detained.
‘Our Armed Forces are under a huge degree of scrutiny.’ He said he feared this could inhibit commanders in the field in future.’
A spokesman for the Ministry of Defence said: ‘Whilst we will investigate and take appropriate action when there are credible claims of serious mistreatment and abuse, we will defend ourselves from claims that we believe are without merit.’

THEY ARE TERRORISTS! THEY WANT TO KILL US! When are we going to wake up and realize that yes there have to be rules of engagement when it comes to interrogation, but this is getting ridiculous. Next thing you know the only way to get information out of TERRORISTS is going to be to sit down over coffee.