Business Owner Under Attack for This Sign About Michael Brown

An Illinois business owner is under attack for a sign he put up commemorating the one year anniversary of the Ferguson shooting. Do you think this sign is over-the-line[1]? 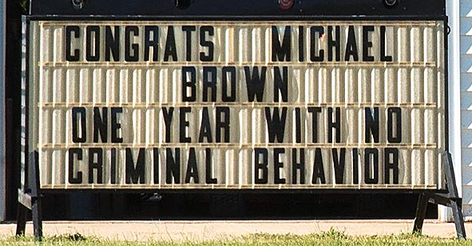 “It is what it is — all these people in Ferguson going crazy over a guy that broke the law three times that day, robbed a story, tried to kill a cop, tried to get his gun, it’s crazy,” Schmidt said.

“What they’re doing to cops makes me sick,” he added.

The business owner told reporters he uses the sign as a way to speak out against national issues. The U.S. has lost its “moral compass,” he said.

Personally? I honestly don’t know what the point of putting the sign up was or what message he’s trying to convey, or how the sign is in any way helpful. It also doesn’t do anything to effectively push back against the BS “hands up, don’t shoot” narrative the left has created over Ferguson. Maybe it’s just me though. Thoughts?