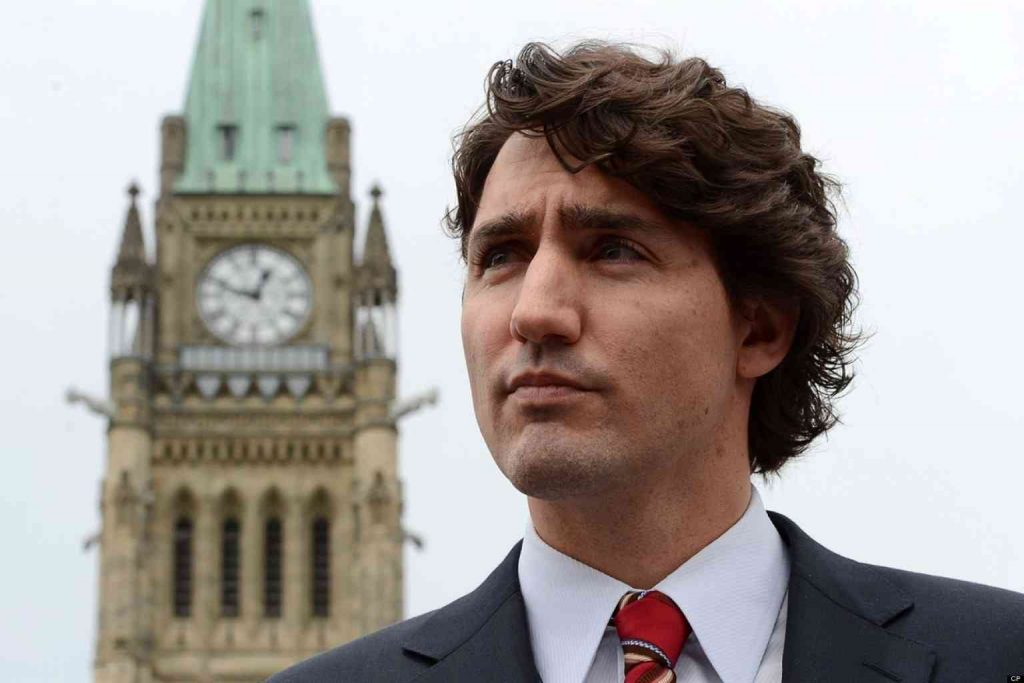 [1]I have mixed feelings about Justin Trudeau’s election as prime minister of Canada. I am distantly related to him, but he’s basically a socialist[2]. The conservative reign under Prime Minister Stephen Harper is officially over. In Canadian elections this month, Trudeau’s Liberal Party won enough votes[3] for a strong majority government, enough to govern without relying on other parties in a coalition, and chose Trudeau as leader.

Several months ago, Trudeau’s Liberal Party was in third place, but he benefited from the country tiring of the same party in office for too long; the less charismatic Harper had held the office for ten years. He also benefited from a famous name; his late father Pierre Trudeau was prime minister during almost all of 1968 to 1984, in a cult of personality known as “Trudeaumania.”

The younger Trudeau became a media personality in Canada, and starred in the two-part CBC[4] miniseries The Great War, about Canada’s participation in World War I. He developed a reputation as the “rock star” of the party, engaging in such activities as a boxing match with a conservative senator (he won). He was seen[5] as an edgy, flashy alternative to the low-key, almost nerdy style of Harper.

Under Harper, the country had shifted[6] to the center right, as Harper “lowered sales and corporate taxes, avoided climate change legislation, and strongly supported the oil and gas extraction industry.”

“Justin Trudeau promised to respond to Canada’s economic slowdown by running modest deficits and building infrastructure[9]. (That’s something that most mainstream economists would support.) He has refused to raise Canada’scorporate tax rate[10], although he wants a slightly higher income tax[11] for the top 1 percent to fund a middle-class tax cut. He has been noncommittal on the new trade deal, the Trans-Pacific Partnership[12], placing himself to the right of Hillary Clinton. He wants to legalize marijuana[13]. And he has promised, vaguely, that Canada will have a more progressive climate change policy[14]. This would put him squarely at the center-left in any Western country.”

Zakaria overlooks some of the most left-leaning views of Trudeau. Trudeaucondemned[15] “small-business owners as tax cheats and [told] Canadian business leaders that if they didn’t accept higher taxation now, they’d face even more radical claims in the future.” He has vowed to end Canada’s airstrikes against ISIS, and said he will cancel the Harper government’s F-35 jet contract. He has pledged to resettle 25,000 Syrian refugees in Canada by the end of 2015, which will cost $250 million a year. He will distance[16] Canada from Israel, unlike Harper. He has pledged to invest $3 billion in home care services. He opposes pro-life positions, and has said he will not support Liberal Party candidates who are pro-life. He opposed the Harper government’s legislation targeting human smuggling, saying it would penalize the victims of smuggling.

Perhaps most telling of all, Trudeau sounds a bit like President Obama, running on a campaign theme of “What does real change mean to you?”

To his credit, Trudeau has a long list of issue positions[17] on his campaign website; he’s not hiding anything. But they’re pretty far left, and not much different from what socialist Bernie Sanders is saying in the U.S. Trudeau says[18] he wants to improve relations with the U.S., but explains it entails “develop[ing] a continent-wide clean energy and environment agreement.” This just means cajoling the U.S. into more international socialist agreements.

Trudeau’s rise to power is similar to that of Donald Trump’s due to the celebrity status. But his politics are much closer to Bernie Sanders than Trump. Trudeau appears likely to follow in the footsteps of his father, whose legacy was drastically shifting Canada to the left by liberalizing social morals, legalizing abortion, and expanding the power of the federal government.

Trudeau’s election should serve as a warning about the power of celebrity. This is why Trump is doing so well. Like it or not, there will always be the middle, undecided and often ignorant voters who end up deciding elections. However, unlike Trudeau, he will not have the advantage of a fawning media carrying him to victory in the general election.

We’ve just had almost eight years of Obama. If the Western world is now taking a sharp lurch to the left in elections, where does that leave us next election?