The NFL again sent the message any unauthorized alteration to a uniform—no matter the aim—will result in a fine. Carolina Panther, Josh Norman decided…doing THIS to show his Patriotism,[1] was worth dropping 5k for! 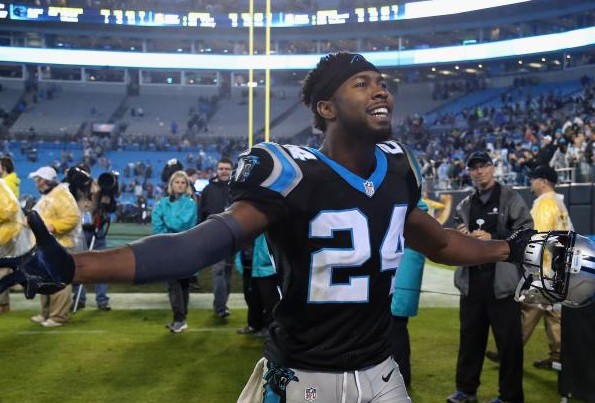 Carolina Panthers cornerback Josh Norman will have to pay $5,000 to the league after wearing cleats in violation of the NFL’s uniform code, per Joseph Person of the Charlotte Observer.

On Thursday, Norman posted a photo of the offending cleats and the letter he received from the league regarding the fine:

?? Grandpa was A SEARGANT in the Korean war. He saw his whole company blowe…. https://t.co/71pxw5Hzkq[3] pic.twitter.com/S95ItwBzBh[4]

“Grandpa was A SEARGANT in the Korean war. He saw his whole company blowed up,” he wrote in the accompanying message. “He was a gunner the only one to survived! If it was no him then there would be no Me. So Regardless of this piece of paper. In His HONOR I salute Our TROOPS & VETERANS #PROUDBRAVE.”

Norman can’t claim to be surprised by the action. He acknowledged that a fine was likely in the offing as a result.

“Price we pay for freedom and I’ll take that any day,” he said Sunday, following the team’s 37-29 win over the Green Bay Packers, per Person. “Big ups to them and everything they do for our country.”

Norman said he is donating the now autographed cleats to the USO of North and South Carolina for auction, per Jared Dubin of CBS Sports.

In addition, the NFL has already proved it is extremely stringent when it comes to following uniform protocols.

In October, Pittsburgh Steelers defensive end Cameron Heyward received a $5,787 fine for writing the words “Iron” and “Head” on his eye black to honor his late father, who died of cancer. The league also punished Steelers running back DeAngelo Williams for wearing eye black emblazoned with the message “Find a cure” and a pink ribbon, the goal of which was to raise awareness for breast cancer.

An expensive statement, but a statement worthy of 5k nonetheless.