On a hot and steamy day in NYC, I was looking for blogging fodder when lo’ and behold I say the following story on Free North Carolina [1]of an sad incident that occurred in Springfield Missouri. 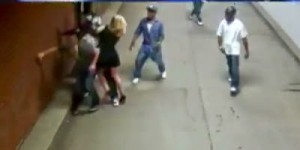 WorldNetDaily[3] reports the security video is stark, but authorities in Springfield, Missouri, are hoping there are enough details for someone to provide the names of members of a black gang who attacked and bludgeoned two victims recently.

Although the gang members caused serious injuries, they didn’t leave anything that has identified them.

The video shows the six gang members coming up from behind and taking down a man who was walking along with a woman. She’s attacked, too, but not in the initial slugfest.

For half a minute, the beating continues. First one attacker bails, then a second and then two more.

After a final round of kicking and slugging, the last two gang members flee.

The Springfield Police Department and the local Crime Stoppers program released the video of the violent assault in the city’s downtown to help identify suspects.
More here[4]