We all know that there were promises made. Sweet, sweet promises given out loud and proud to us from dozens of liberal celebrities. A promise they will leave the country if Trump becomes President. Flee to Canada, Italy, Africa, freaking Mars… all of the above, they had no problem stating as their destination. 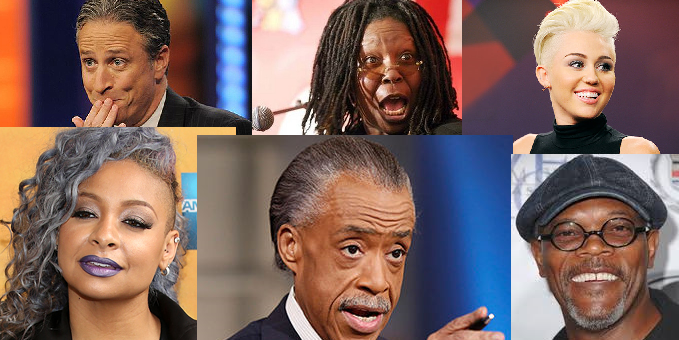 Of course what they consider a “threat” is not so much one to the rest of us. Now however, since Trump has become our elect President, some of these Hollywood stars will have some questions they’ll come face to face with as Americans start to poke at them and hold them responsible for their promise…I mean “threat”

We thought it would be interesting for you to check out this list…so you can keep an eye out for their response.

Bryan Cranston said he hopes he doesn’t have to pack his bags, but would “definitely move” if Trump won. “Absolutely, I would definitely move,” the “Breaking Bad” star said on “The Bestseller Experiment” podcast. “It’s not real to me that that would happen. I hope to God it won’t.”

Samuel L. Jackson slammed Trump for running a “hate”-filled campaign and said he would move to South Africa if he wins. “If that motherf—er becomes president, I’m moving my black ass to South Africa,” the movie star quipped to Jimmy Kimmel.

Lena Dunham told Andy Cohen at the Matrix Awards that “I know a lot of people have been threatening to do this, but I really will. I know a lovely place in Vancouver.” The star and creator of HBO’s “Girls” has been a vocal advocate for Hillary Clinton, the Democratic nominee.

Neve Campbell, an actress on the political drama “House of Cards,” vowed to move back home to Canada, while “Orange is the New Black” actress Natasha Lyonne said she would hightail it to a mental hospital.

Of course, we also have some singers for you…

Cher tweeted this summer that if Trump gets elected, “I’m moving to Jupiter.”

Miley Cyrus wrote in an emotional Instagram post in March that tears were running down her cheek and she was unbelievably scared and sad. “I am moving if he is president,” the young pop star said. “I don’t say things I don’t mean!”

Barbara Streisand, a vocal Clinton supporter, told “60 Minutes” that “I’m either coming to your country if you’ll let me in, or Canada.”

Ne-Yo told TMZ last month that he’d move to Canada and be neighbors with fellow R&B singer Drake if the country elected Trump.

Now for our comedians…who are not as funny as they are raunchy.

Comedian Amy Schumer said in September that Spain would be her destination of choice.

“My act will change because I will need to learn to speak Spanish,” Schumer said in an appearance on the BBC’s “Newsnight.” “Because I will move to Spain or somewhere. It’s beyond my comprehension if Trump won. It’s just too crazy.”

Chelsea Handler said she already made contingency plans months ago.

“I did buy a house in another country just in case,” the comedian and talk show host said during an appearance on “Live with Kelly and Michael” in May. “So all these people that threaten to leave the country and then don’t — I actually will leave that country.”

Former “Daily Show” host Jon Stewart said he would consider “getting in a rocket and going to another planet, because clearly this planet’s gone bonkers” if the real estate mogul wins.

Whoopi Goldberg, co-host of the “The View”, said on an episode of the talk show earlier this year that if the country elects Trump, “maybe it’s time for me to move, you know. I can afford to go.”

Keegan-Michael Key said he would flee north to Canada. “It’s like, 10 minutes from Detroit,” the comedian told TMZ in January. “That’s where I’m from; my mom lives there. It’d make her happy too.”

Hispanic comedian George Lopez said Trump “won’t have to worry about immigration” if he takes the White House because “we’ll all go back.”

Keep Reading for more of these promises from POLITICAL FIGURES HERE[2].

I don’t know about you, but if I were in the shoes of some of these people and had said some of the things they said, I’d be looking for a dark corner to run to, just so I could shrivel up into a ball of nothing and be unseen. I can almost imagine them sinking into their chairs now trying to disappear…

Of course, we’re talking about liberals here. Which means, they are still somehow finding a way to play the victim. Victim of WHAT!? You do what you love and you make millions doing it. The next words out of their damn mouths should be… THANK YOU AMERICA!

Instead they just talk about up and leaving her the moment they don’t get their way.

That’s a very toxic relationship. If they want a break-up they need to pack and go. Cut and wipe. So America can move on to bigger and better things…