In a downright crazy turn of events Chapman University is allowing a “protest” in which students defaced a statue of Reagan, claiming he was guilty of Racism and Classism[1]. 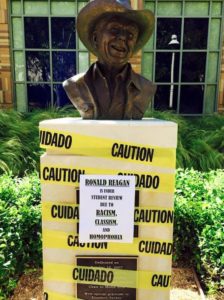 The statues were covered in yellow caution tape, with signs posted on each figure indicating that they were under “student review” for various charges:

“RONALD REAGAN is under student review due to RACISM, CLASSISM, and HOMOPHOBIA.”

Despite the defacement, school officials cited freedom of expression in a statement to Campus Reform[3], indicating that the students would not be punished:

“All Chapman University students and faculty are encouraged to speak their minds and express their personal opinions, both privately and in public forums, on any topics they wish. Sometimes those topics may not necessarily reflect the beliefs and viewpoints of the institution or its leaders, but the University strongly supports the right of free expression for members of our learning community and welcomes the opportunity to engage in respectful dialogue.”

“Because the statues in question were not vandalized, but simply have signage placed on them – and although University policy states that all signage on campus must be authorized – the University administration acknowledges the students’ right to express their views and will allow the signage to remain until the end of the week, when staff typically remove unauthorized or outdated signage on campus.”

It isn’t clear whether the bust (there were several targeting including Thatcher and Friedman) of every historical figure on campus was the subject of protest, or if these busts were singled out.”

It is amazing that these kids would have never been able to do any of these protests under Soviet rule.  If it wasn’t for Ronald Reagan, they’d all be speaking Russian.