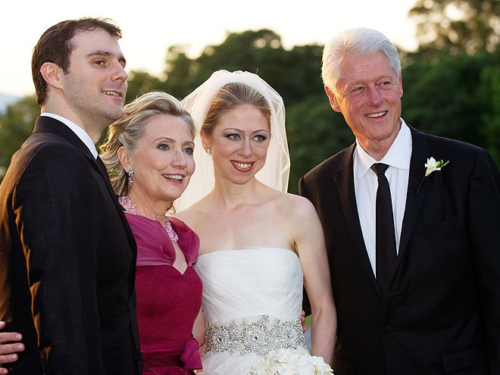 Well, well, well, what have we here[2]? “Just” emails about yoga and Chelsea’s wedding? Looks like there’s a good reason Hillary deleted those emails. The wedding was apparently paid for by the Clinton Foundation. One can only wonder whether the yoga was too. While the rest of us have to save up to pay for our weddings, Chelsea simply tapped into the Clinton family’s go-to money pot…the Clinton Foundation. No doubt Chelsea was “in need” and that’s why she gets to have her expensive nuptials paid for by charity. Oh, and she also gets paid to campaign…from the Foundation.

Chelsea had her dad Bill Clinton’s former aide and co-founder of the Clinton Global Initiative, Doug Band, kicked out. And he was not pleased. His displeasure was expressed in some emails intimating that Chelsea was living in a glass house and had no business throwing stones at him. In an email[4] conversation with John Podesta, Hillary’s campaign chairman, shared by WikiLeaks, Band said “I learned from the best, the investigation into her getting paid for campaigning, using foundation resources for her wedding and life for a decade, taxes on money from her parents….”

And finished with, “I hope that you will speak to her and end this. Once we go down this road….”

Looks like Band isn’t keeping this to himself any more. None of this is legal. Charities have very specific rules. But, as always, the Clintons, including Chelsea, don’t believe the rules apply to them. Chelsea also learned from the best. mom and dad have been engaging in nefarious activities for years and have never been held accountable. There’s no reason for Chelsea to believe she will have to answer for her misuse of Foundation funds. She’s begun her new married life on a foundation of lies and corruption. She’s just a chip off the old block. We must drain the swamp and keep Hillary out of the White House. The Clinton Dynasty needs to be shut down for good.