Over the weekend, Chicago was engulfed in violence. The scientific method demands that officials ask themselves why their city is plagued by gun violence while other big cities that embrace the Second Amendment enjoy lower crime rates. Still, Chicago’s top cop feels he has the answer[1] to why his city is suffering from such violence: law-abiding gun owners and their firearms. 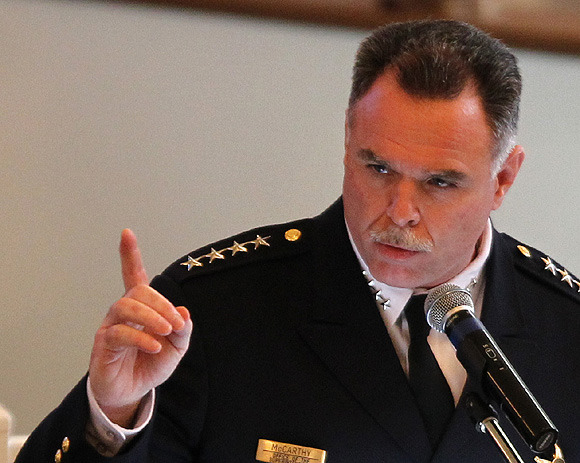 The violent criminal subculture of Bloody Chicago was responsible for wounding 47+ people over this past weekend. 9 of the 47+ died* of their wounds in a city where crime reports are on par with—and have many times exceeded—casualty reports from our wars in Iraq and Afghanistan.

It isn’t known as “Mogadishu on Lake Michigan” for nothing.

The youngest fatality of this weekend’s crime spree was the seven-year-old son of an alleged gang leader, who, of course, refused to cooperate with police in apprehending his son’s killer or killers. Abiding by the thug culture ethos of “no snitching” was more important to him.

It’s just another weekend highlighting of the violent criminal subculture problem[3] we discussed yesterday. Until we identify, acknowledge, and target the criminal-glorifying thug culture itself, we cannot hope to stop the violent crime that is responsible for so many of the the deaths we see in cities like Chicago from one week to the next.

Sadly, we know the victims and we know their assailants, and we have for years, yet we refuse to do anything about it.

Instead, the people who could be making a difference create scapegoats[4]:

Who are the murderers and their victims? A 2011 Chicago police analysis found 90 percent of murder victims in the city are men, 76 percent of victims have prior arrest records, and the most common ages of killers are 17 and 18 years old.

“These officers are putting their lives on the line. Does anybody realize what we’re talking about here? There are guns, they kill people!” said Supt. Garry McCarthy, Chicago Police Department.

It couldn’t be the fault of criminals.

The guns made them do it.

Sadly, Chicago Police Superintendent Garry McCarthy seems to really believe that merely possessing guns will turn you into a violent killer… presumably through some sort of mind control[5]:

“It’s real simple,” he said at the conference[6]. “Gun possessors are potential murderers. If they don’t learn a lesson for carrying the gun, they keep carrying the gun. They get into an argument, now instead of fighting, they shoot.”

This bully with a badge intentionally conflating law-abiding citizens with violent criminal sociopaths is the same man who seemed eager in 2013 to have his officers shoot lawful concealed carriers first[7], and ask for permits later.

No big city will ever be completely free of crime. However, it’s clear that Chicago is dedicated to only making their problems worse as they embrace the same failed (and unconstitutional) laws that helped create the problem in the first place.