A father out on a lunch date with his daughter caught a sweet moment between a homeless man and a Chick-fil-A store manager on Monday. This will melt your heart:[1] 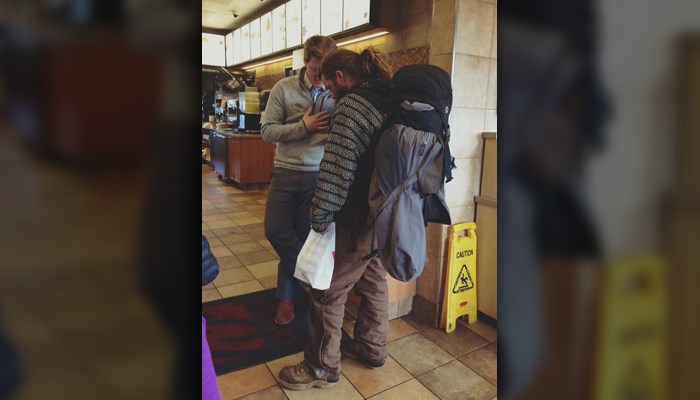 Joey Mustain says he was taking his daughter, Stella, for a regular outing when they caught the unknown homeless man asking for any extra food.

“Mud was wet and caked on his well-traveled shoes. His hair was matted, and his beard wasn’t a statement as much as it was a necessity and a sign that he doesn’t get to shave as often as most of us do,” Mustain wrote on Facebook. “People near him kept their distance, but that didn’t stop him from being kind.”

Mustain wrote that the homeless man continued to wait for a manager, who said he wouldn’t give him the scraps – but would give him a full, warm meal – but wanted something in return.

“The only thing he required was that the man let him pray with him,” Mustain said.

During what was a busy lunch hour, the two men prayed together, and Mustain captured the moment.

“I heard love in that prayer,” Mustain continued. “The homeless man wasn’t some untouchable stain on business. He was the reason that store opened its doors this morning.”

Mustain said that this is the type of lesson in kindness that he wants his daughter to see out in the world.

Since being posted on Monday, it has more than 29,000 shares.

This is a good story of how Jesus wanted Christians to live. The next time you see someone in need – offer more than just your scraps. Offer your heart and possibly a hand in prayer – it may be just what is needed.