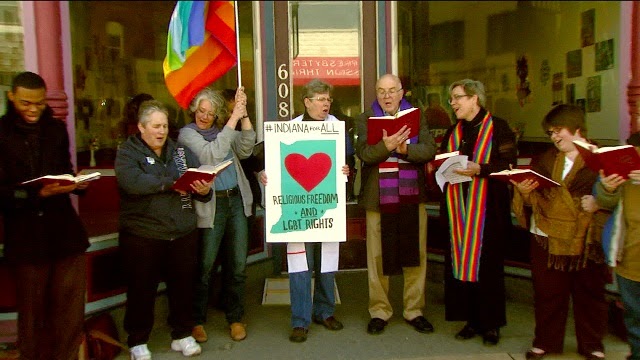 The real story behind Memories Pizza is how a local news affiliate went bigotshopping[1]. The workers at the pizza restaurant were minding their own business when an opportunistic reporter with stars in her eyes found a patsy in Crystal O’Conner who was only answering a hypothetical question honestly according to her Christian faith. That’s exactly what the reporter wanted and a handful Leftist activists using advanced algorithms amounting faux social media campaign on Memories Pizza.

WSBT[2] reports they call it a message of love.

A choir from South Bend called The Ripple Effect got together to sing songs outside Memories Pizza in Walkerton.

Owners of the pizzeria responded to questions about  Indiana’s Religious Freedom Restoration law which quickly became a national story.

The Ripple Effect is a Christian choir and some of the singers are gay. Members say the issue in Walkerton is tearing people apart. So, they wanted to do something to try and fix it.

“Let There be Peace on Earth” and “Jesus Loves Me.” Those were just two of the songs The Ripple Effect sang.

Sherry Klinedinst is the choir’s director and she says, “Being a musician the best way to help [3] is through the healing power of music.”

Klinedinst is from Walkerton. She says Facebook is filled with people on both sides of the debate and it’s creating a division.

Members of the choir say they don’t have anything against the owners. They just want to be the bridge that brings the community back together like it used to be.

Klinedinst says, “We’re not here to condemn or condone the owners of the establishment. We’re here to show them and the community that we can show love to people in spite of our differences.”

Gail Bannister is also a member of The Ripple Effect. She’s a Christian and she’s a lesbian.

Bannister says being a part of the group and performing [4] outside Memories Pizza lets her show people that they can live together despite their differences.