This is going on all over Europe. Average citizens without political affiliation, without organization are standing up against the invasion of Europe[1]. This is organic. And why it will come to civil war — if this world’s leaders refuse to ACKNOWLEDGE the impending THREAT! 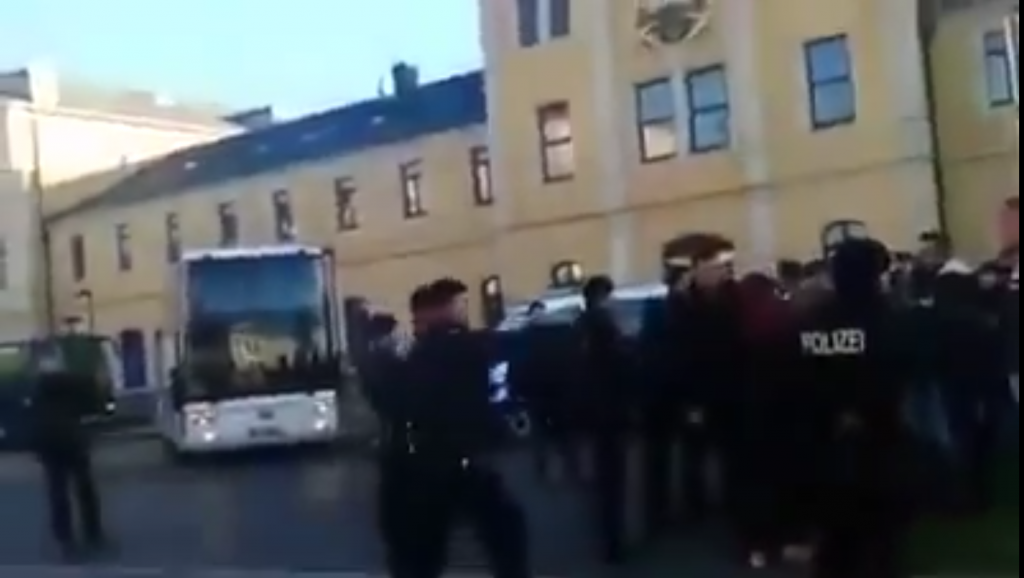 The clip begins with police officers pushing back German citizens who are preventing the buses from entering the town.

“You go against your own people, you go in front, we pay your money, our children – their future is ruined – you are ruining this country. Do you have any honor left in your bodies?” says one of the men as the police get more aggressive.

Some of the citizens begin chanting, “Our own people should come first,” before openly goading the police by yelling, “Go ahead and shoot – shoot your own people.”

The officers again order the citizens to get off the street before threatening to get their batons out.

On Sunday, German Vice Chancellor Sigmar Gabriel said that the country expects to take in more than a million migrants this year.[3]

Support for anti-immigrant party Alternative for Germany (AfD) has climbed in recent weeks, while support for the governing conservative bloc that has overseen the wave of migrants coming into Germany is at its lowest since the last election two years ago.

In light of numerous reports concerning rapes being committed by migrants in and around refugee camps, positivity towards the influx of migrants has waned.

A recent poll conducted by broadcaster ARD found that 51 per cent of Germans were ‘scared’ about the arrival of 200,000 migrants a month, compared to 47 per cent saying they had no concerns. These figures have changed significantly from just a few weeks ago, when only 38 per cent said they had concerns.

Meanwhile, another video shot outside a refugee camp in Augsburg shows a deluge of trash that migrants have dumped over their balconies.

Why is it, that some of our world’s leaders are choosing, EVEN in the face of a THREAT, to blanket their cowardice under the name of “Political Correctness”! When has putting your own people last, EVER been an option in a situation like this…and just think, we maybe next.