According to the founder of Votestand, a voter fraud reporting app[1], over 3 million illegal aliens voted in the 2016 elections this month.

If this is true, in full or even in part, then we have a serious problem. Illegals should not be able to influence the political direction of a country that they are not legally part of. If they want the right to vote, they need to go through all of the legal channels that make them citizens of the United States. 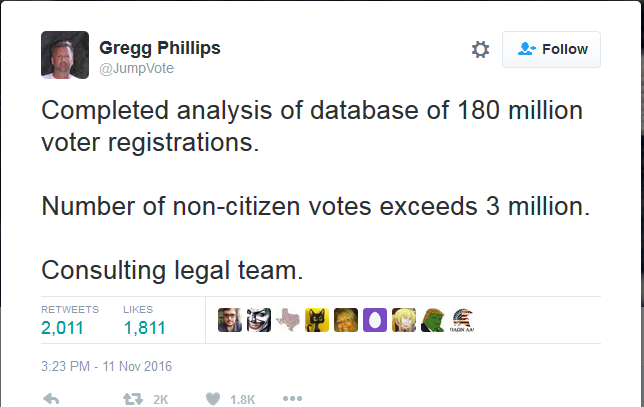 The Friday following the election of Donald Trump as the 45th President of the United States, Gregg Phillips from Votestand claimed that the number of non-citizens who voted “exceeds 3 million.”

The illegally cast ballots could have come from any or all of the states listed below, as they do not require any form of ID to vote.

The liberal argument against voter ID laws is feeble at best and claims that it would suppress the votes of those who don’t have the “means” of acquiring one are ridiculous. This is simply code for “we don’t want voters to have to prove their citizenship because we’ve locked up the illegal alien vote and it’s the only way we can stay in power in some areas.”

Regarding this information, Phillips says he is preparing a lawsuit and is getting ready to take it to federal court.

If you have any questions about how he came to this conclusion, or what methods were used, visit his Twitter page[3], where he is answering questions regarding this information.

Assuming this is true, it could potentially open the door for investigation into all manner of electoral corruption and violations in the United States. It could also be a really bad day for Democrats.