CNN’s Brooke Baldwin couldn’t hold back her emotions after hearing one of her guests use the N-word. (He actually used the whole word, but I’m not crass enough to repeat him.)

It should be noted that the man who used the term, journalist Charles Kaiser, is white, while Baldwin’s other guest, Trump supporter Paris Dennard, a black man, stared on incredulously after hearing the racial slur. 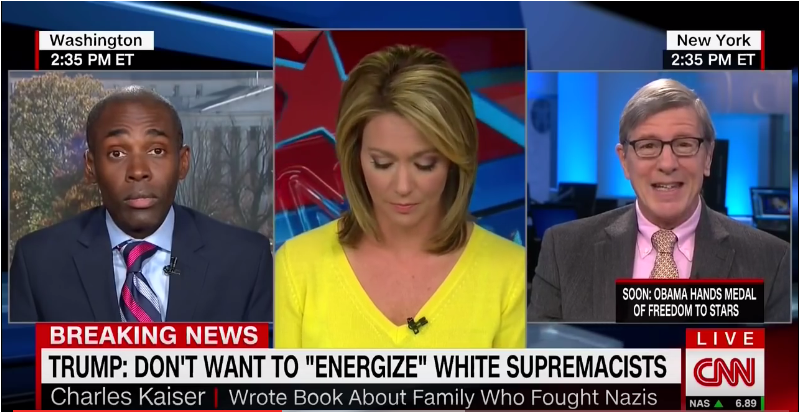 During the interview, Kaiser lamented the many things he alleges Trump did to support the alt-Right movement and eventually came to Trump’s new Chief of Strategy Steve Bannon.

“If you don’t want to support the alt-right don’t choose as a White House counselor a man who uses the word n*****. Whose wife says that he did not want his daughters to go to a school with too many jews. And don’t choose as an Attorney General a man who calls the NAACP an un-American organization.”

Baldwin went on to admonish Kaiser for his use of the term, but Jezebel[2] doesn’t seem to think that it’s inappropriate for a white man to use that term if he’s a liberal trying to prove a point.

Should Kaiser have censored himself? Perhaps, but probably not. In using the actual word, he was making a point about how inappropriate it is to have a man like Bannon in the White House. I’m guessing Kaiser knew what he was doing here. Being clear about the seriousness of the situation at hand is necessary and is supposedly the job of networks like CNN. Kaiser did tell[3] the Washington Post later that he was sorry for misquoting Bannon (there’s no evidence that Bannon has used that specific word), and had confused him with Sen. Jeff Sessions, current nominee for Attorney General[4], who was also referenced in his comments. However, the rest of what he says appears to stand. “There’s a part of me that feels you can’t fully express the shocking nature of the first appointments of Donald Trump without using the actual words used by these appointees,” he said.

So, you used a blatantly offensive racial slur and attributed it to the wrong man? And liberals will still say it’s okay because “hey, he’s trying to prove a point.” Unfortunately, that “point” completely falls apart when the whole premise of your accusation turns out to be a lie.

If it weren’t for double-standards, some people wouldn’t have standards at all.