by Just An American

This interview is the winner when it comes to seeing liberal JAWS drop over not being able to handle the truth. It’s CNN of course, and they are in FULL-BLOWN Trump Derangement mode when something really sweet happens. 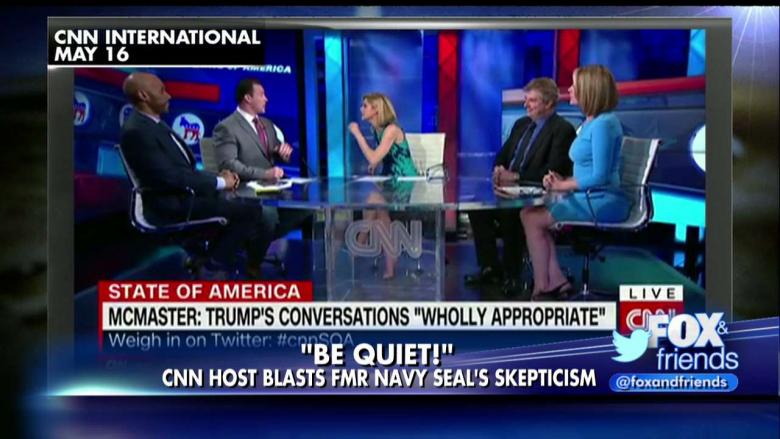 They have a panel, and on this panel is former Navy SEAL and big Trump supporter, Carl Higbie. He is there to talk on the questions of whether President Trump has in fact leaked classified information or not to the Russians with their last visit to the White House. Of course this is an idea that has been fabricated by the left to create even just a little bit of suspicion…because that’s all they need to do damage.

First off, what a silly question to ask someone who she knows dang well isn’t going to play her games or fall for her attempts at pushing him into a corner. When you are equipped with the truth, there is no winning against it…she learned that the hardway. Well, the hard way and for us the more entertaining way to be exact.

It was the truth he shared next that sent her into a TOTAL meltdown right there on LIVE T.V. [2]

Grab some popcorn and enjoy this folks…

“I’ve been sitting here quietly listening to all this BS quite frankly. Did you listen to anything [White House National Security Adviser H.R.] McMaster said today?” Higbie asked Bolduan and the rest of the CNN panel. “Where he said, ‘I was in the room, that didn’t happen?’”

Higbie was referring to remarks made by McMaster, who claimed that the president’s decision to share sensitive intelligence with Russian Foreign Minister Sergey Lavrov and Russian Ambassador Sergey Kislyak was “wholly appropriate” to the conversation they were having.

His point was that the CNN host and others were completely focused on the reports of anonymous officials who weren’t even at the meeting as opposed to the named people on record, H.R. McMaster and Dina Powell, who were in the room.

“You’re basing all of these allegations off of one or maybe two sources,” said Higbie, who referenced a CNN story that cited two anonymous former officials “knowledgeable of the situation.”

“Two former officials? Come out, name those people, then we’ll have something to talk about,” Higbie said.

Higbie said the sources were “were hiding in anonymity,” triggering Bolduan to go over the edge and start shouting.

The sources are indeed ‘hiding in anonymity’ because they broke the law and committed a felony by sharing the information they did with the media.

As it is, they spread more about the information than they did on anything Trump actually said, this is including the name of the ally involved in providing information. The name was even published in the N.Y. Times! The truth is, if these so-called “sources” actually feared the President, they could have gone about leaking the information to either of the intel committees, but they didn’t.

Instead they ran to the media, and this was with purpose. It was all directed at undermining President Trump. When you’re dealing with snakes like this, real americans like Carl Higbie are a great secret weapon to unleash on them. He doesn’t hide in the shadows worrying about what could happen to him if he speaks the truth, nor does he hold back when it comes to sharing it.

You see he understands one of the greatest things about the ‘truth’.

The truth, is still true…even if no one believes it. There is power in understanding that.