The establishment in both political parties hate Ted Cruz because of his unwavering adherence to constitutional principles which limit their power over the lives of “We the People.” The audacity that Cruz will not be bought and will not waver on his principles, is just outrageous to their sensibilities. The way that he is ‘interviewed’ shows just how much contempt the media really holds toward him: 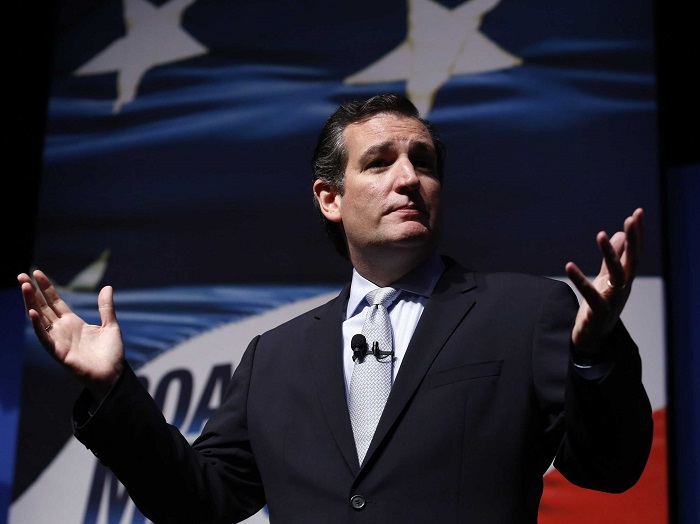 The leftstream old media despises Cruz as well, as evidenced by the hostile nature of those interviewing him, compared to how they treat other guests, especially when you pay attention to their tone.

Exhibit “A” was the Texas senator’s interview with Obama Regime mouthpiece Dana Bash on CNN Sunday, where she pretended to be a journalist while performing like an establishment house organ.

Here’s an excerpt from the interview in which Cruz calls Bash out, calling the premise of her question, “ridiculous,” as she tries to pin GOP leadership’s failure’s directly on his shoulders (emphasis added).

DANA BASH: Senator, I want to bring it back home to the stalemate in Congress over Homeland Security funding. The government again, that part of the government, runs out of money in just a few weeks. Republicans are looking at you and wondering what is your end game here because this is a strategy crafted by you, the idea of holding up funding for the Department of Homeland Security in order to try to stop the president and his executive order on immigration.

So what is your end game?

SENATOR TED CRUZ: Well, Dana, the premise of that question is not true, and it’s frankly ridiculous. This is a strategy that came from Republican leadership. This is the cromnibus strategy.

If you’ll recall I fought tooth and nail against cromnibus in December because I said in December this gives up our leverage and it puts us into effectively a boxed canyon. So I would say it’s now up to leadership to lay out their strategy. I told them this was not a winning strategy and they went down this road anyway fighting tooth and nail.

But let me make a broader point. What we saw last week was stunning irresponsibility from the Senate Democrats. The Senate Democrats three times filibustered funding for the Department of Homeland Security. We have a bill on the floor to fund DHS.

CRUZ: And three times the Democrats stood together filibustered and said, we will not allow the Senate to take up this bill.

CRUZ: At a time of growing national security threats across the world, that’s irresponsible.

BASH: OK. Senator, with respect, it’s not a ridiculous premise because what you wanted to do was hold up the entire government funding back in December and the cromnibus, we won’t get too much in the weeds here, was a compromise to try to work around that. So, that’s I think the reality of what’s going on here.

On your point about the Democrats, yes, they are holding up the bill. They’re not allowing debate, but in the reality that if there were a debate, this bill still wouldn’t pass and, again, when I say this bill, it’s funding the Department of Homeland Security but also stopping the president for his executive action on immigration.

The votes aren’t there to pass that, right?

CRUZ: Well, Dana, number one, we need to fund the Department of Homeland Security. The Democrats need to stop holding national security hostage for partisan political objectives. What they’re doing is wrong and irresponsible. Number two, when it comes to amnesty, the president’s executive amnesty is wrong, it’s illegal and it’s unconstitutional.

And you say it would necessarily get support in the Senate. Well, you know, it’s interesting. We don’t know that seven Democrats had publicly criticized it on the campaign trail. They told their constituents they didn’t support the president ignoring federal law, ignoring the constitution and unilaterally and illegally granting amnesty to four to 5 million people here illegally.

BASH: And Senator, are you talking to those Senate Democrats?

CRUZ: …whether they were telling the truth when they were talking to the voters back home or whether they’ll just stand with President Obama instead.

BASH: Have you been workings behind the scenes to try to get those Senate Democrats to buck their president, to vote with you all and pass a bill that stops his executive action?

CRUZ: You know, unfortunately right now, Dana, the Democrats are working as a unit to filibuster funding for the Department of Homeland Security. And it’s one of the patterns we’ve seen the last six years that’s really unusual, is that Senate Democrats have consistently been unwilling to take on the president. It’s part of why Harry Reid and the Democrats shut down the Senate. And I got to say it’s unprecedented.

I mean, look, Dana, if there’s one thing that I think you would acknowledge I’ve been willing to do is take on my own party when my own party is not standing for the principles we’re supposed to stand for. It is time to see some Senate Democrats willing to take on their own president but right now they’re putting partisan politics ahead of principle and that’s why they’re filibustering the funding for Homeland Security. It’s the wrong thing to be doing.

BASH: You are dead right. You have had your differences, it’s an understatement, with your party. And there are some that we talk to who say, here we go again, Ted Cruz taking us into a fight that we can’t win again.

What do you say to that?

CRUZ: Well, I think it’s a good talking point for people who want to shift blame. Let’s be clear, the Cromnibus was leadership’s plan. I said at the time it is a bad plan and it is a plan that is designed to lose.

Pretty much, Senator Cruz. I love how he politely tells her, actually, NO, multiple times as she puts words in his mouth. Nice try, lady. Senator Cruz has all day long to show you how you’re wrong.