While reading this story, you should bear in mind the phrase: “You can’t please everybody,” because that’s exactly what Trump is contending with here.

CNN is so shameless that they felt the need to not only overlook Trump’s actions in helping save jobs in Indiana, they jumped straight to someone who got their feelings hurt by the deal. 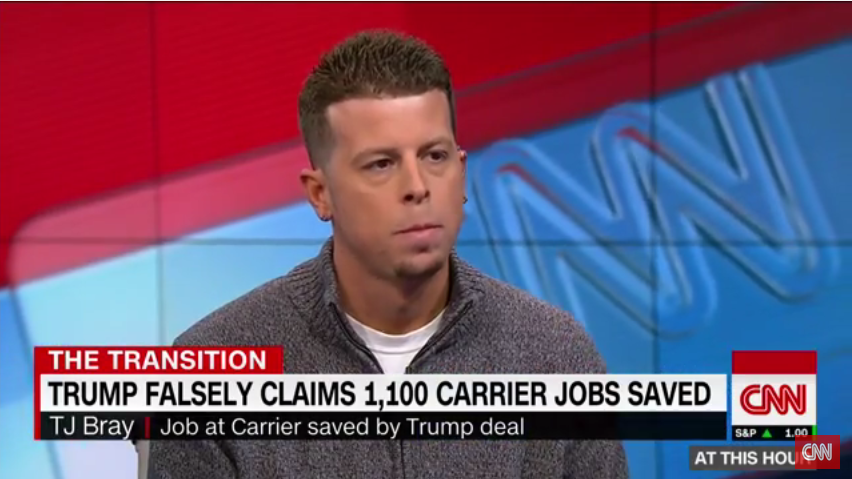 TJ Bray, a Carrier employee, claims that Donald Trump intentionally lied about the number of jobs he saved, adding in a large number of jobs that were already “slated to stay” in Indiana.

“Yeah, uh, you know, President-elect Trump came in and said it was 1,100 jobs. Uhm, we find out – sat with the company, uh, day before yesterday – and we find out it’s actually only 750 actually union production jobs that will be staying. Uhm, so Trump kinda added in the 400 R&D and engineering jobs that were already slated to stay, so uh, we’re kinda disappointed that we’re losing 550 actual union jobs.”

The CNN anchor then pushed Mr. Bray, whose job was saved by the deal, to call Donald Trump a liar on air. He responds in a hesitant manner before finally agreeing that they were lied to about the exact number of jobs that Trump kept in America.

Now it’s possible that Trump simply got his numbers mixed up (though being a businessman, I highly doubt it), but did CNN even bother to ask his people how they got to the number “1,100” before bringing this guy on air for the sole purpose of thumbing your nose at the President-elect?

I’m going to guess not.

A lie is an intentional manipulation or misstatement of facts, so if Trump didn’t know it was only 750 union jobs he was saving (which admittedly sounds less impressive than 1,100), then he couldn’t have actually lied about it.

I’m for giving Trump the benefit of the doubt on this one, simply because of how malicious CNN has been in the past about attacking him and posting false stories.