CNN’s Sanders Acts A FOOL, Talking About Asians And The ‘N’ Word – ON AIR! VIDEO

The fear-mongering surrounding the anti-Trump movement is absolutely ridiculous. The fact that people actually think that somehow white people are going to suddenly enslave blacks because Trump is in office is the most absurd thing I’ve ever heard in my life. 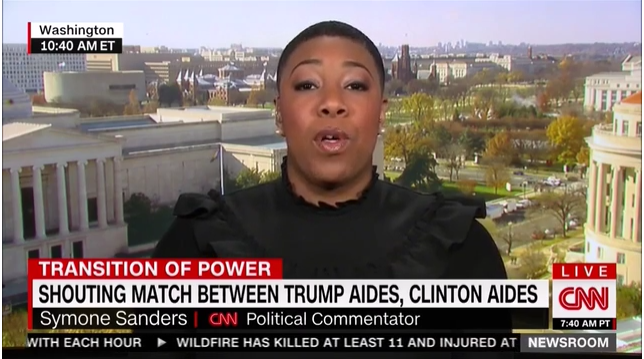 CNN political commentator Symone Sanders engaged in some grade-A fearmongering on CNN Newsroom when she claimed that Make America Great Again secretly meant that we’re going to bring back slavery and intern Asians. Of course, she had no evidence of this, but it’s CNN[2]; evidence isn’t necessary.

“I do not think that every single Trump supporter is racist. But it is — we have to be real and understand that the populism around Donald Trump’s campaign was intrinsically tied to racism. it was intrinsically tied to making people that were not white working-class people the other. Make America Great Again takes us back — people that look like me, takes us back to a time when we were in slavery, when we were in chains, when we worked on plantations, internment camps for the Chinese. So, it is really, really important that if we want to heal, that if people want to get past, if Trump supporters want to say, well, why are you calling me racist? That we have to understand that the populism was tied to elements of racism. And the last thing I would say is that racism is — a racist is — I think people think racism is dogs and white hoods and water hoses and the n-word, and that is not the only form of racism. There are microaggressions. There are oh, I didn’t — you speak so well. These are microaggressions that are forms of prejudice and discrimination that we have to address.”

When Kellyanne Conway pointed out that people who voted for Barack Obama had also voted for Donald Trump, Sanders lost it, becoming visibly agitated and screaming “That’s the equivalent of saying ‘I have a black friend.'” It’s clearly inconceivable to her that anyone who voted for Obama could be so frustrated by the inept Democratic party that they decided to vote for Trump. Obviously they’re just racists and need to shut up because… tolerance or something.

If you hate yourself enough, you can watch the video at Breitbart.com[3].