As Colin Kaepernick Kneeled, the Cop behind him made him look like a jerk

It’s not hard to dislike someone who is a jerk, especially if they’re that way for all of the wrong reasons. Take Colin Kaepernick for example, he thinks he is making a proud and necessary political statement when he refuses to stand for the National Anthem before his football games. Many people would be in agreement and view him as some sort of trend-setter. A role-model, if you would.

But while Kaepernick is caught up in his own movement of mis-stated “facts” and illogical conclusions, the real world is going on around him and the rest of us have to deal with it. 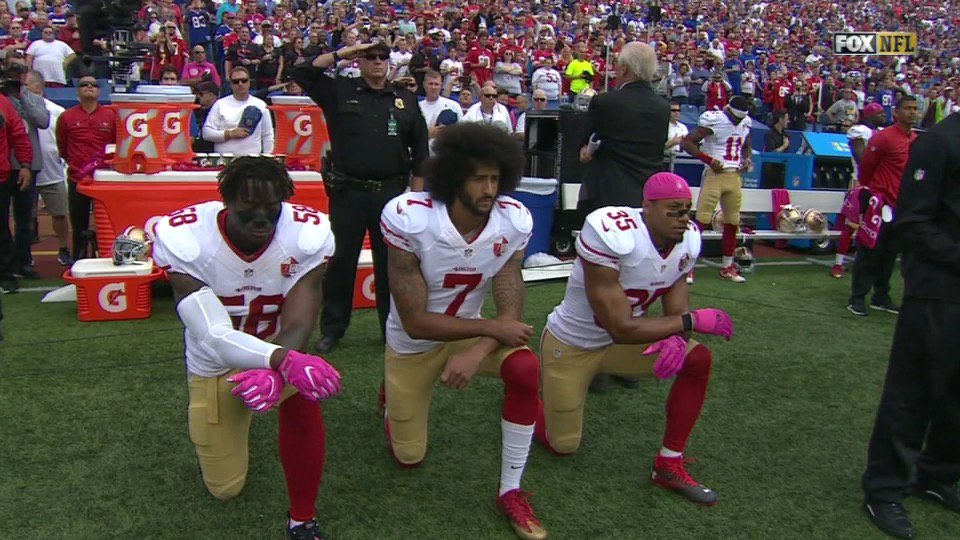 Kaepernick can’t even summon the dignity to stand for our National Anthem (Which has nothing to do with the state the country is currently in and is a representation of what struggles were endured to bring about our freedom), so it’s not exactly difficult to make him look like the world’s biggest ass.

While he and some teammates decided to kneel during the anthem before their game with the Buffalo Bills, one cop made the group look horrible in front of the whole world.

You see, while this trio thinks they’re standing up for something because the media wants them to think that way, the officer behind them knows the real story. He knows how hard it is hearing how your brothers and sisters in blue have died while on duty, and knowing full well that he might be next if he’s not careful. With this in mind, the officer saluted the flag for the duration of the anthem.

Kinda makes the millionaire Kapernick not seem like such a badass after all, doesn’t it?

While it’s perfectly within his Constitutional rights to make himself look like an idiot, it’s also our right to criticize his asinine moves. God bless this officer and the men and women he works with.