Karma is sweet, especially if it leads to the complete and utter embarrassment of someone who insulted an entire nation of good people just to make a political statement and get some attention for himself because really, who knew this twerp’s name before he took a knee during the National Anthem?

The Dallas Cowboys are used to being the butt of many, many jokes, but for one night, it’s fair to say that they completely took over the 49ers’ home stadium and showed them what happens when they disrespect America. 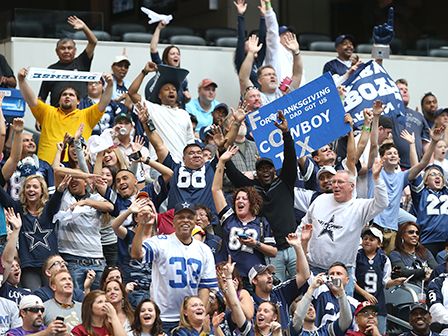 I’m not a big fan of football, but I am a big fan of justice. That being said, this is a perfect combination of both.

While I know nothing about the sport, I know enough to realize that the Dallas Cowboys aren’t the most popular team on the planet and honestly, I don’t know anyone who supports the 49ers, for whatever reason.

Especially after Colin Kaepernick pulled his petulant little stunt and got lobbed into the spotlight.

So, what happened when the 49ers went to play against the Dallas Cowboys? Well, this California player said it best[2]:

“I couldn’t believe it,” 49ers linebacker Ahmad Brooks said, via the SFgate.com[3]. “I was like ‘There’s more Dallas Cowboys fans than there are 49ers fans.'”

Yep, Cowboy’s fans showed up in droves to support their team and took over a majority of the 49ers’ home stadium.

You don’t mess with Texas and when you disrespect America, you’re disrespecting Texas. That’s all it took for over-zealous football fans to make a huge statement and support their favorite team at the same time.

I’m sure nobody in that crowd would have cheered if a player took a knee during what is arguably the greatest song in history.

This story makes my heart and my petty side very happy. Take THAT, you anti-American haters!