Dorothy Bland, dean of the journalism school at the University of North Texas, is used to taking a walk at daybreak.[1] That’s what she was doing when she says…THIS happened!

Rain delayed her exercise regimen until later Saturday morning when she began traversing the streets of her well-to-do Corinth neighborhood.

But soon “flashing lights and sirens from a police vehicle” paused her walk, she wrote in a column for the Dallas Morning News.

Bland was wearing a hooded sweatshirt, and she’s black.

“Like most African-Americans, I am familiar with the phrase ‘driving while black,’ but was I really being stopped for walking on the street in my own neighborhood?” she asked.

“Yes,” she answered. “In the words of Sal Ruibal, ‘Walking while black is a crime in many jurisdictions. May God have mercy on our nation.’”

Bland said she asked the officers if there was a problem but didn’t “remember getting a decent answer before one of the officers asked me where I lived and for identification.” 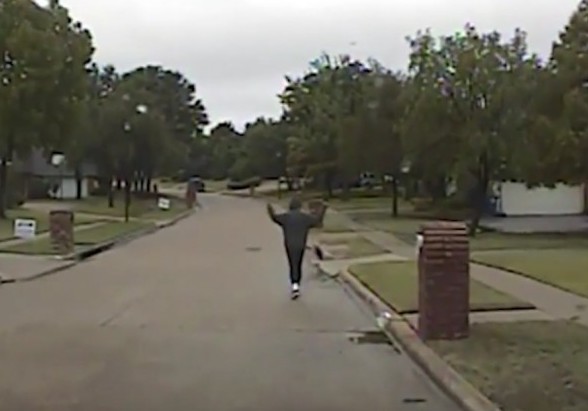 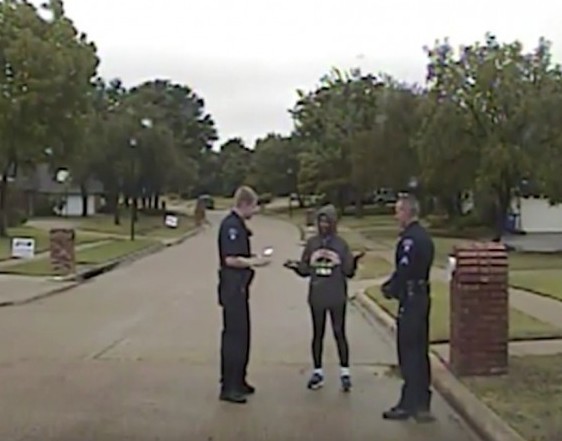 I remember saying something like, “Around the corner. This is my neighborhood, and I’m a taxpayer who pays a lot of taxes.” As for the I.D. question, how many Americans typically carry I.D. with them on their morning walk? Do you realize I bought the hoodie I was wearing after completing the Harvard University Institute for Management and Leadership in Education in 2014? Do you realize I have hosted gatherings for family, friends, faculty, staff and students in my home? Not once was a police officer called. To those officers, my education or property-owner status didn’t matter. One officer captured my address and date of birth.

She added that “for safety’s sake” she used her iPhone to take a photo of the officers and their patrol car’s license plate, as Bland didn’t want to end up like “the dozens of others who have died while in police custody.” Within hours after posting about the incident on Facebook, Bland said more than 100 friends spread the news across the country.

“You are now in the company of Henry Louis Gates and others with the same experience,” she said one of her former students wrote her. “We must stop racial profiling.”

Bland added that she stopped by the mayor’s house and asked him, “Do I look like a criminal?” She continued, “Mayor Bill Heidemann said no and shook his head in disbelief. I appreciate the mayor being a good neighbor, but why should he need to verify that I am not a menace to society?”

But after Corinth Police Chief Debra Walthall caught wind of the incident, she wrote a response, which was in the second part of the Dallas Morning News piece, and said that the encounter was about Bland’s safety, not race — and that dashcam video from the officer’s patrol car proves it.

Walthall said the officers saw Bland walking in the street with earbuds and “unaware that there was a pickup truck directly behind her that had to almost come to a complete stop to avoid hitting her.”

“The driver of the truck looked at the officers as they passed and held his hands in the air, which implied ‘aren’t you going to do something about this?’” the chief wrote. “The officers turned around and drove behind Ms. Bland.”

Walthall noted that while the patrol car’s emergency lights were activated, no sirens were used, contrary to Bland’s claim — and the officers “immediately” told Bland about their concern for her safety and the pickup truck and that she should walk against traffic instead.

“Ms. Bland had been observed earlier by these same officers, but she was not in the street and impeding traffic, so she was not contacted,” Walthall wrote.

“Impeding traffic is a Class C misdemeanor, and it is our policy to ask for identification from people we encounter for this type violation,” the chief added. “I am surprised by her comments as this was not a confrontational encounter but a display of professionalism and genuine concern for her safety.”

Walthall noted that Bland never contacted police or returned the chief’s phone message about the incident.

“The citizens of Corinth as a whole are a highly educated population,” Walthall concluded, “and it is disappointing that one of our residents would attempt to make this a racial issue when clearly it is not.”

I am embarrassed for her…she sounded absolutely fine with the situation on video. So she is a liar.