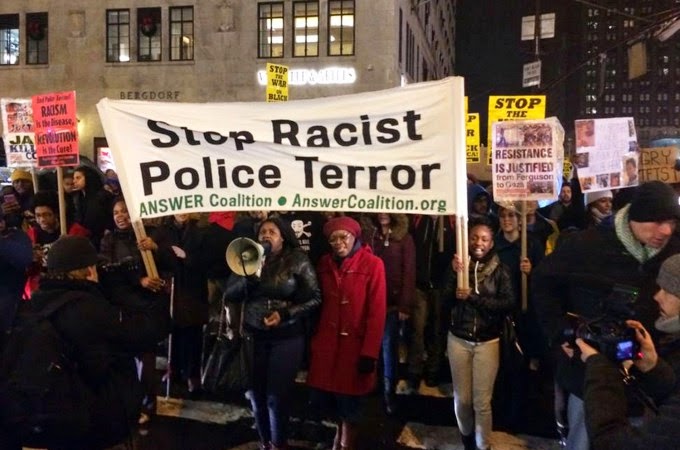 If you look at the bottom of this photo of rowdy protectors you’d see that they call themselves the Answer Coalition. It didn’t take much time to find out that this a Communist anti-war group[2] that doesn’t have much to do anymore besides focus their attention on harassing the NYPD with lies and dissention.

NY Post[3] reports over a thousand anti-cop activists tried to shut down Fifth Avenue in Midtown and the Upper East Side on Tuesday– defying Mayor Bill de Blasio[4]‘s call for a moratorium on the demonstrations after two Brooklyn police officers were slain[5].

Many of the activists took shots at the mayor.

“The mayor says stop that, we say fuck that!” yelled activists, while jumping in place. The group started on 59th Street and 5th Avenue, went down to 53rd Street, and then marched up the Upper East Side.

Activists said they planned to march up to East Harlem, and then protest at a local precinct.

Tarik Grand, 25, of Brooklyn said he was out there because of de Blasio’s words on Monday. “We’re protesting tonight, because the mayor specifically said not to,” he said. “They asked for a moment of silence for the cops, but not for Garner.”

Most of the agitators chanted angrily at the police. “How do you spell murderers? N-Y-P-D!” said the agitators.

“NYPD, KKK, how many kids did you kill today?” other protesters chanted, who started on the sidewalk before moving onto the streets of Fifth and Madison Avenue.

The activists are using the hashtags “jailkillercops” and “winter of resistance” to organize their activities.