Congressman Walks Up To GOWDY, Flicks His Ear During Interview- Guess What Happened Next! [WATCH]

Its not everyday that you witness a politician being anything but a shifty, full of rhetorical vomit, and just plain despicable…And Trey Gowdy is that politician, today. In fact, the guy is as cold as ice[1] when it comes to getting down to the business of the people.

Gowdy has long been known a man that you do not what to go up against when it comes to investigations. He is a bulldog, and usually can smell blood in the water…We are talking Chuck Norris status, but for politics. 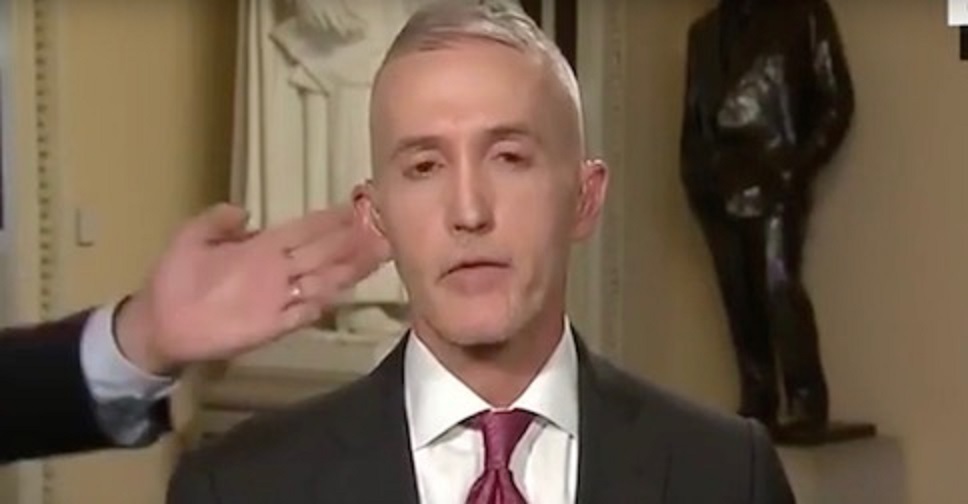 Recently Gowdy was being interviewed by CNN on live television. The interview was via broadcast, and you could tell that Gowdy was in Washington, because many of his ‘colleagues’ can be seen passing behind the shot during the interview. One such person to pass by was Rep. Sean Duffy, who was talking on his phone.

Now you would think that all politicians would continue on their way, and not dare try and interrupt another persons interview…Yeah, no. That’s not what Duffy had on his mind. Instead, he took it upon himself to pull a little prank that we all did when we were kids: Try and distract Gowdy.

But in his attempt to make it happen, he help showcase just how focused House colleague Trey Gowdy is when he passed behind him and decided to pull his ear!

Gowdy’s was in the middle of answering CNN host Wolf Blitzer‘s question on “The Situation Room”, and didn’t even skip a beat. He acted as if nothing has happened. Duffy later tweeted out a fun nod to the Gowdy:

Just had to check, and it's confirmed: @TGowdySC[3] has ice water in his veins- doesn't even skip a beat. https://t.co/RPsRLZ6VIq[4]

John Hawkins’ New book ‘101 Things All Young Adults Should Know’, he teaches in chapter 10, “People are what they are and probably are not going to change much once they reach adulthood.” It would seem that Duffy just couldn’t resist bringing out the little kid for a live prank!