The Wednesday debate saw a lot of interesting moments, but none more so than the discussion of the candidates’ opinions of Russian leader Vladmir Putin[1]. Democratic Presidential nominee Hillary Clinton even went so far as to claim that Republican Presidential nominee Donald Trump would be a “puppet” for Putin if he were to become President.

If Clinton holds so much animosity toward the Russian leader, then why is John Podesta still her campaign chair? 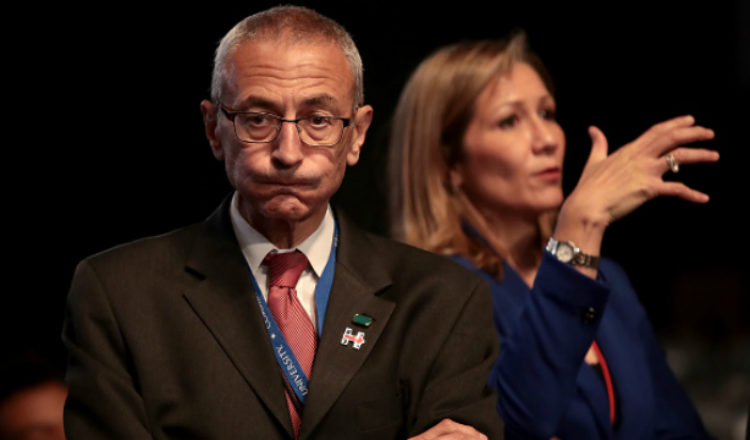 WikiLeaks[3] revealed a shocking connection between Podesta’s daughter and Vladmir Putin that would of most certainly caused him to have been fired if Hillary actually had any integrity or felt the strength of her “convictions.”

According to this email, John Podesta had received 75,000 “common shares” of a company called Joule Unlimited. These shares were promptly handed over to his daughter, Megan Rouse. A 2014 letter[4] reveals that Podesta transferred these shares to Lionido Holdings LLC, whose address is Rouse’s home address. He also named her the managing member[5].

Now, if Hillary is so convinced that Putin needs to be reigned in by the next President, why is she allowing high-ranking staff within her campaign to do business with companies he finances[6]?

Of course Hillary can’t know everything about the goings-on in the private lives of her staff, but this is a Grand Canyon-sized oversight on her part. If she can’t even make sure her campaign chair isn’t doing business with the enemy, then how is she supposed to preside over an entire nation of people?

It would seem to me that there are two equally-viable explanations at work here:

One, Hillary doesn’t know (incompetence) that her trusted employees aren’t on the up-and-up and consistent with her “beliefs.”

Or two, she just doesn’t care that someone so close to her campaign is making her look like an outright fool.

Of course, it could be a generous combination of the two, which I think is most likely. She doesn’t seem to be aware of what is happening with her staff, which makes the possibility of a Hillary Clinton Presidency that much more frightening. I mean, the government is (unfortunately) a really big entity, and the buck stops with her. Are we going to get another four years of “I didn’t know about that until I read it in a newspaper”? I certainly hope not, because this country can only take so much more sub-par leadership before we eventually crumble under the weight of our own stupidity.