We’ve all felt the exasperation of a child who doesn’t want to take a nap when you need just 5 minutes to yourself to do laundry. Jonathan Thompson of Amityville, New York got so frustrated when his girlfriend’s 4 year old godson wouldn’t go to sleep that he PUNCHED the child to death.[1] 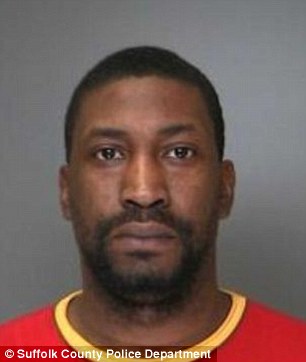 A New York man has pleaded guilty to beating his girlfriend’s godson to death.

Jonathan Thompson, of Amityville, New York, punched 4-year-old Adonis Reed so hard in the stomach when the boy refused to take a nap that the youngster died as the result of a lacerated liver.

At the time, Reed was living with his godmother, Lakisha Pitt, who was dating Thompson.

Thompson, 34, had confessed to the killing just days after it happened in January of 2013, but in an odd twist was recently suing his former lawyer, and almost every agency connected with the case, claiming a ‘clear conspiracy’ by all to violate his rights.

In addition to a stay of his trial he was also asking for $500 million.

According to Newsday, the suit also claimed that Reed died not because of the beating he suffered at the hands of Thompson, but rather from ‘overzealous resuscitation efforts by first responders and medical malpractice at Good Samaritan Hospital Medical Center in West Islip.’

Representing himself, Thompson decided to plead guilty yesterday, just one day before jury selection was set to begin.

He likely changed his mind after medical evidence strongly suggested that the beating caused the death, as opposed to any problems with Reed’s medical care.

Personally, I’m leaning more toward a life sentence, considering the victim is an innocent child, and Thompson is a convicted felon. He’s a disgusting excuse of a human being, and under no circumstances should he be allowed back onto the streets to hurt anyone else.
Endnotes: