Cop Attempts To Subdue Man Who Allegedly Murdered His Wife, After He SMASHES A Gas Pump! – VIDEO

Some alarming footage of the moment a Long Island man smashed his car into a Brooklyn gas station after trying to make a getaway from police after allegedly brutally murdering his wife. 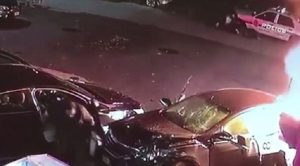 Security footage shows Robert Crumb, 44, crashing into a Citgo gas station at Fladlands and Pennsylvania Avenues in Brooklyn on Friday, causing his car to hit and block another, while fire from the gas engulfs his car.

Ben Williams works at the gas station and witnessed the whole ordeal unfold, ‘The flames were huge, they went up all the way to the ceiling of the station.’

As an officer – gun drawn – was in pursuit of Crumb, he approaches fast towards the passenger door and opens it, appearing to be commanding Crumb to exit the vehicle.

He does…but he comes barreling out with his arms swinging above him. 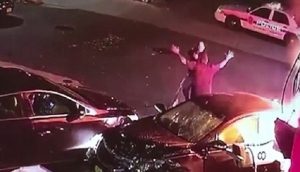 With his arms extended in a threatening manner, and obviously not following commands, Crumb runs after the cop erratically as the the officer refuses to fire his weapon, but instead back peddles in a zig-zag formation. The cop eventually trips and falls back as Crumb jumps on him and they start to scuffle. It’s here that other officers intervene and get Crumb under control and under arrest.

All this was sparked by the allegation that Crumb had just fled from stabbing his wife to death and wounding his 16 year-old daughter as well.

It was reported that after Crumb had fled the family home where the crime took place, his 12 year-old son called the 911. The police soon caught up with him, but he sped away, leading to a 30-mile, 20-minute high-speed chase all the way through Brooklyn. Crumb soon after lost control of his car, which is when he slammed into the Citgo gas station stall, which turned his car into a ball of flame.

All four officers who scrambled to arrest Crumb were treated for smoke inhalation and one sustained a head injury, but is reported to be okay.