Cop Breaks Silence to Reveal the TRUTH About Anti-Trump Protesters

“I could not believe what I saw” This was a statement given by an African-American Tucson cop who attended a Donald Trump rally on Saturday as a neutral observer. He went on to also describe the anti-trump protesters to be “the most hateful people I’ve ever seen”.[1] His description of the truth is light years different from what you hear the media reporting… classic. 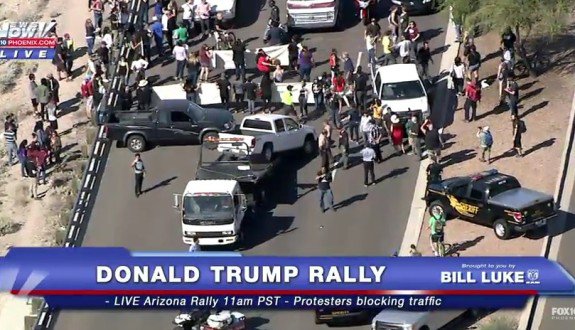 Describing what he saw as “very very shocking,” Tatum said anti-Trump protesters were “verbally violent,” swearing and yelling at people who were attending the rally.

Speaking about the Trump supporters, Tatum said, “everybody seemed to be peaceful, there wasn’t a lot of hatred and maliciousness going on,” and that Trump supporters were not lashing out at protesters.

Challenging the media narrative that Trump is ‘inciting violence’ against protesters, Tatum said he heard an announcement before the event which told attendees not to become involved in altercations with protesters who were being unruly.

“That was another thing I don’t see portrayed in the media, is that they gave a disclaimer, don’t hurt these people, you don’t need to do this”.

Tatum goes on to explain how protesters were yelling “f**k Donald Trump” in front of children and that one parent had to cover her daughter’s ears because “these people are just outlandish and out of control”.

Despite being a police officer, even Tatum said he felt uncomfortable and that “at any moment I could get sucker punched by somebody”.

Although it was the protesters who were accusing Trump supporters of being hateful, Tatum asserted, “These people are the most hateful, evil people I’ve ever seen, I could not believe what I saw….I thought at some point it was going to be a full fledged riot because these people were acting so outrageous.”

Tatum concluded by noting that the media rarely portrays the protesters in a negative light, focusing instead on violence committed by Trump supporters after they have been provoked by demonstrators “spitting and yelling in people’s faces”.

Do you expect any more from people that may have sold their soul to a devil called Soros?