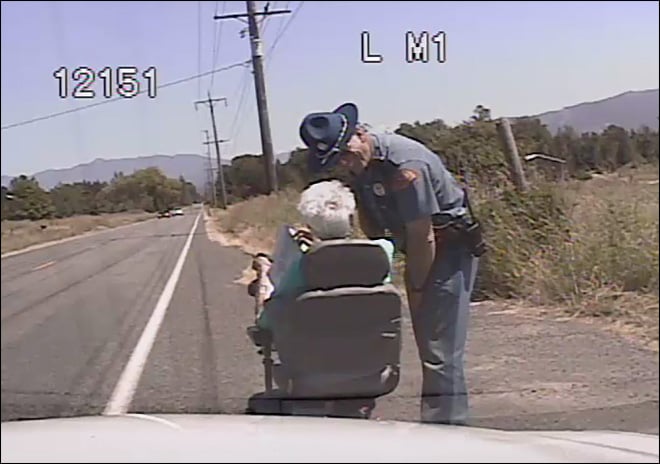 [1]A video of a police officer following an elderly woman with his lights flashing is getting a lot of attention, but not because anything bad happened. It was simply a kind state trooper trying to make the best of a weird situation.[2]

The woman had gone out for coffee in Lynden Tuesday afternoon, but got lost while trying to get home, troopers said. When Hintz caught up with her, she was nearly four miles from her house and continuing to head in the wrong direction.

“It’s a pretty major state route where semis and cars travel,” he added.

Newly-released dash cam video shows Hintz’s interaction with the woman, who has not been identified.

“There’s no license plate. She’s in a little… cart,” Hintz is heard saying over the police radio.

“We’re getting a ton of calls about you,” he says to her, after asking her to pull over. “Everybody’s worried about you because you’ve been on and off the road.”

For several minutes, the woman insists she knows where she is going. At one point, she even pulls out a map. At another, she gets stuck on the side of the road.

“Let’s see if we can get you out of here,” Hintz says to the woman. “Just don’t tip (the scooter),’ she chides him.

It took more than an hour to get the woman back home, with the duo heading down the state highway at about 3 1/2 mph..

The woman can’t walk, troopers said. They could have called an ambulance, but that would have also required finding a way to get the scooter home, too.

Kudos to that kind officer for handling what could have been a very awkward situation. All of us will be senior citizens some day and perhaps unable to drive a car anymore. She probably just needed to get out of the house, and although she probably didn’t choose the best method to do it, the officer resolved everything for the best. Watch the humorous clip below of the officer escorting her, and his dashcam video.