Some people should just never be allowed around children or around anyone for that matter.

This particular incident[1], is definitely one of those cases that will have your blood boiling. 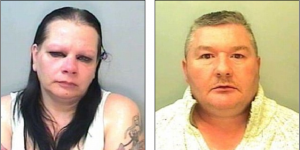 A couple were jailed yesterday for forcing a 13-year-old girl to take part in a humiliating sexual assault on a 14-year-old boy.

Jemma Baskerville held the boy down during the attack while her former partner Stephen Lawrence put on a pornographic video to try to stimulate the victim.

The boy endured a 45 minute ordeal in which he was held down while the girl put her hand down his trousers and assaulted him.

Baskerville was jailed for four years and Lawrence for four and a half after a judge at Exeter Crown Court ruled they both posed a risk to children.

The boy suffered months of bullying and teasing at school after the girl spread rumours about what had happened to him in Lawrence’s flat in Bideford, Devon.

They were the only adults present at Lawrence’s flat in Bideford but instead of protecting children at a teenage party, they spurred them on to take part in the sex act.

This man and woman are monsters and they’ll for sure get what they deserve in prison.