For most service members with a service dog, the bond between man and animal is unbreakable. But some people are sick and evil inside, and the story of what these two horrible people did proves it[1]. 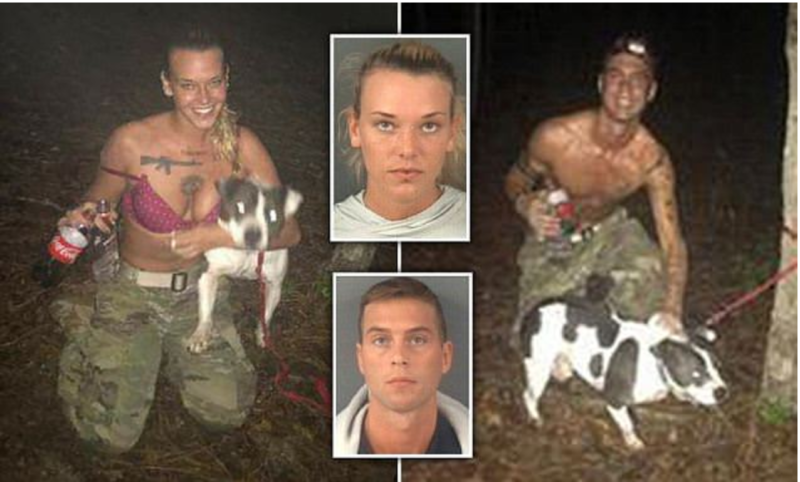 Marinna Rollins is a veteran who was given a medical discharge from the military due to PTSD. She was assigned a service dog named Camboui, who she called Cam. Her boyfriend, Jarren Heng, is still on active duty. And together, the two of them committed an awful crime.

They took Cam, a grey and white pitbull, to a wooded area, where they tied him to a tree. Rollins then shot him five times, laughing with Heng, as they took turns filming the brutal crime.

On the video, Heng can be heard saying, “Let me hit him once,” while Rollins shot the dog. Rollins can likewise be heard saying, “It’s been real … I love you, you’re my puppy, you’re a good puppy, but… ” and after the dog was dead, Rollins can be seen dragging the poor dog’s body around. They then rolled Cam into a shallow grave. “Kind of put him a little deeper,” Heng said.

Text messages and social media postings appear to show a lot of premeditation. On Rollins’ Facebook page, she had posted, “Great last day with the pooch! Sad he has to go, but he will be much happier where he is heading off to :)” with Heng responding, “He’s gonna have such a great new life.”

Rollins is currently being held on $25,000 bail and has been charged with animal cruelty and conspiracy.

These actions show that these two believe in pure evil, nothing less. They should never be allowed to walk free again.