Courtney may be messed up but she showed some real courage by taking that Sarsour creature on. You go girl!! When Courtney Love calls you out as a ‘vile disgrace’, you have really got serious problems. Not to say that Courtney isn’t smart, she is actually very intelligent…which is easier to see now that she has cleaned up her act some. 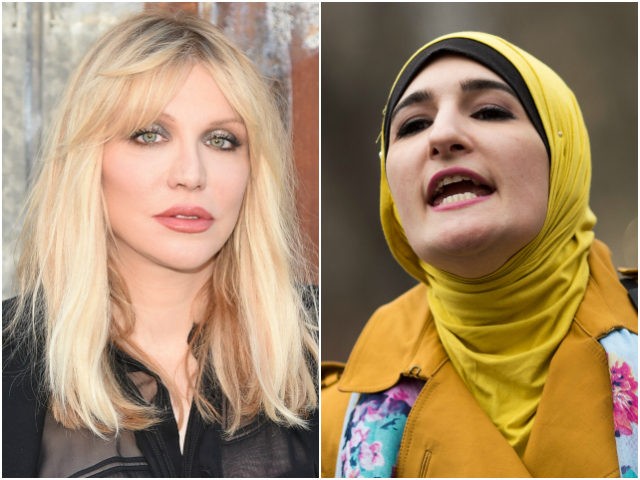 This time she has really nailed it.[2]

Icon Courtney love has LEVELED anti-Donald trump Women’s March leader and Muslim activist Linda Sarsour, and tweeted out to her, calling her a “vile disgrace to women and all mankind”. I know, glorious right?

Well soon after, she found herself engaged in an argument with Women’s March social media head, Alyssa Klein.

You're a vile disgrace to women and all mankind @lsarsour[3]

“Linda is the kindest, most generous, most incredible woman I know. She makes me proud to be a woman. I am forever proud to be her sister,” responded Klein, prompting Love to reply “Well that’s a shame, count me out of anything else related to her. She’s a fraud.”

Linda is the kindest, most generous, most incredible woman I know. She makes me proud to be a woman. I am forever proud to be her sister.

Well that's a shame, count me out of anything else related to her. Shes a fraud

[email protected][7] trying to make a name for herself amongst Trump supporters I guess. Denying a woman justice who was brutally beaten.

Then came the other Women’s March activists out to attack Love, using their same old line… making it about Sarsour being a woman of color blah blah blah bullcrap.

You are using your considerable platform to direct more hate at a woman of color and feminist leader who is already under attack. Why?

Sarsour, a prominent Palestinian activist, has frequently praised Sharia law and Saudi Arabia, attempting to convince the public that women’s rights in the Middle East are better than in the United States.

10 weeks of PAID maternity leave in Saudi Arabia. Yes PAID. And ur worrying about women driving. Puts us to shame. http://t.co/xZAwgg6HXL[10]

In 2011, Sarsour also expressed her desire to “take the vagina away” from Ayaan Hirsi Ali, an ex-Muslim activist and a victim of female genital mutilation.

“I wish I could take their vaginas away,” Sarsour declared, referencing Ayaan Hirsi Ali and ACT for America founder Brigitte Gabriel for their criticism of Islam. “They don’t deserve to be women.”

According to Alex VanNess, director of the Middle East Peace & Security Project at Secure Freedom, Sarsour “also has a long history of criticizing Israel in ways that cross the line into anti-Semitism and terrorist sympathizing.”

“She supports the discriminatory and terror-tied BDS Movement and has claimed that ‘nothing is creepier’ than Zionism,” he reported in February. “She called for solidarity with Muhammad Allan, a member of the terrorist group Palestinian Islamic Jihad who has a history of recruiting suicide bombers.”

Sarsour has also previously called the act of throwing rocks at Israelis “courage.”

Well all have personal issues, but full props to Courtney, with fewer words than a Trump tweet, she laid a knock out, beat down on the new face of community organizer, Democratic feminism, the face of cancer that is eating away at the minds of women everywhere. Sarsour is a disgrace to women and maybe if she doesn’t like how we have it here in the USA she should move to Saudi Arabia!

Any feminist who thinks Sarsour is a champion of women’s rights is about as dumb as a bag of hammers. By the way Sarsour PAID maternity leave for women who aren’t really allowed to work only benefits the husband who has six wives.

Calling out the dangerous fakes and frauds; good for Courtney!