We have all received a wrong order at a fast-food restaurant. When this happens, it can be annoying and after repeated errors, can even be ridiculous. But few of us start shooting up the place when our orders get messed up. However, according to TopRightNews[1], a recent dissatisfied customer did exactly that. 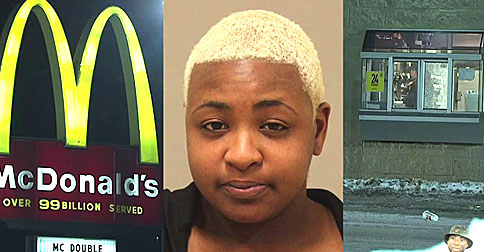 30-year-old Shaneka Torres had just spent a few hours at a nightclub, and was hungry. She remembered that her local McDonald’s had gotten an order wrong for lunch that day, and promised her a free meal the next time with her receipt.

Torres was a passenger in her friend’s car, when she asked for a bacon cheeseburger at the drive thru. Things seemed to be going well. So well, that Torres even flirted with the cashier, and gave him her phone number.

But when Torres got to the second window to get her food, it turned out that McDonald’s screwed up again. But she didn’t just roll her eyes.

Fox 17 in Michigan has more details[3] on what followed:

Essence Lake, a McDonald’s employee who also worked the drive-thru that night, testified that Torres gave them an attitude when her order still wasn’t right, and the burger she ordered did not have bacon on it. Lake told the court when she went to let a coworker know about the incorrect order, she heard a popping noise and then shattered glass.

Lake said she initially thought it was a coffee pot that overheated and had exploded, but soondiscovered a bullet hole in the window, less than two feet higher than where she would have been standing.

That’s right, Torres SHOT at the girl after finding out her cheeseburger was missing the bacon.

Torres and friend quickly fled the scene, hoping to make a speedy getaway. There was just one problem: the phone number she gave to the male employee who caught her fancy was her undoing. And police were able to quickly catch the nutcase before too long.

If convicted on felony weapons charges, Torres faces five years[4] in prison. Which doesn’t seem like all that much when you consider Ms. Lake was perhaps 18 inches from death.

So, is this what society has come to? A woman shoots-up a McDonald’s over missing bacon? It makes me long for a simpler time…