Daughter receives Pop-Tart from mother, finds something disgusting inside [VIDEO] 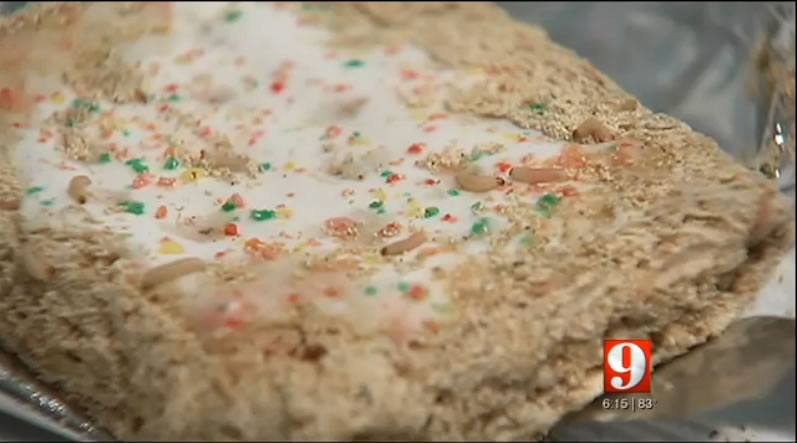 [1]Anyone living in Brevard County, Florida, will probably think twice about eating Pop-Tarts anytime soon. You would think food from a large, prominent brand like Kelloggs would be in excellent condition, right? Not at a Winn-Dixie in Cocoa, Florida. [2]

Winn-Dixie has instructed its stores to pull low-fat, strawberry Pop-Tarts off its shelves after a Brevard County woman said her daughter found maggots inside the packaging.

Jessica Newsome said she bought three boxes and found maggots living inside one.

“Literally maggots all over the box,” Newsome said. “It was downright disgusting. You can actually see how many are living in the icing.”

WFTV reporter Janai Norman saw the maggots inching around as soon as Newsome opened one of the packages still in the box she said she bought last Saturday at the store on Clearlake Road in Cocoa.

She said it was Sunday morning when her 9-year-old daughter took a few bites from the first package, before noticing the maggots.

“She screamed, she said, ‘Mommy, daddy, there’s something living in my Pop-Tart and it crawled in my mouth!’” Newsome said.

With a marked expiration date of Oct. 3, 2015, the Pop-Tarts should be good for another three months.

Kelloggs has not said whether it will be recalling the product. At a minimum, the company needs to come clean with an explanation as to how this could have happened, and if necessary, fire any responsible employees. Watch the maggots crawling on the Pop-Tart in the video below.