After Britians big ‘F-You’ vote last week, the European Union says it’s having trouble relying on NATO to protect its member states from external threats and must develop a policy of collective defense[1] that allows it to “act autonomously if and when necessary”.

No. The EU is made up of countries with their OWN military, that can do the job just fine in their own nations. This is another example of a building full of elites that crave more and more power and control over the normal citizen. 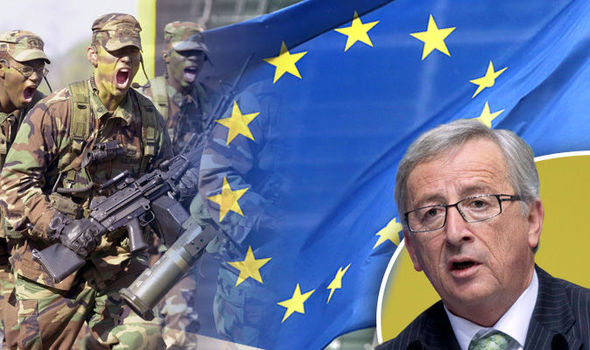 According to a new foreign policy document from the Brussels-based institution to be handed to EU leaders next week, a “credible European defence” is also essential to preserve good relations with the US.

The white paper adds: “While NATO exists to defend its members — most of which are European — from external attack, Europeans must be better equipped, trained and organised to contribute decisively to such collective efforts, as well as to act autonomously if and when necessary.

“A more credible European defence is essential also for the sake of a healthy transatlantic partnership with the United States.”

While it stresses that “NATO remains the primary framework for most member states”, it goes on to urge EU members to “channel a sufficient level of expenditure to defence”.

The document continues: “We live in times of existential crisis, within and beyond the European Union.

“Our Union is under threat. Our European project, which has brought unprecedented peace, prosperity and democracy, is being questioned.

“To the east, the European security order has been violated, while terrorism and violence plague North Africa and the Middle East, as well as Europe itself.

“A fragile world calls for a more confident and responsible European Union, it calls for an outward- and forward-looking European foreign and security policy.”

So a standing military specifically at the EU’s control? That doesn’t sound like it could go horribly wrong at all.

…Sarcasm for those who didn’t get it.

A military should be for sovereign nations only, not regional powers that put strangle holds on uncooperative nations under its control. They might as well be the new USSR.