Death Knell to Hillary: Bombshell book ‘Clinton Cah’ says Foreign Donors to Hillary Clinton’s foundation ‘were rewarded through U.S. policy while she was Secretary of State’, revelation may knock her out of race for prez 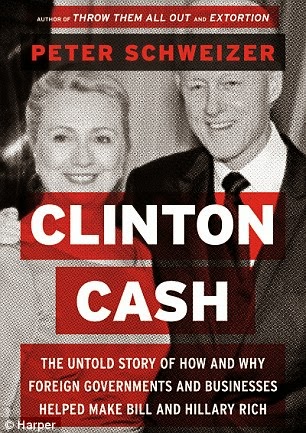 And this is exactly why it was extremely unethical and a severe conflict of interest for Hillary Clinton[1] to accept donations from foreign countries while she secretary of state! I’ve been saying this for weeks.

According to author Peter Schweizer there is a clear trend of money flowing into the controversial Clinton Foundation and rewards emerging for donors – in forms such as free trade agreements and development projects.

The claims against Clinton, Secretary of State from 2009-13, are laid out in Clinton Cash[3], due to be published May 5th by HarperCollins.

Introducing the book, former George W Bush speechwriter said: ‘We will see a pattern of financial transactions involving the Clintons that occurred contemporaneous with favorable U.S. policy decisions benefiting those providing the funds’.

The passage, and examples of the donations and decisions Schweizer analyzes, were published Sunday by the New York Times[4], which was given an advance copy of the book.

The Times reported that Clinton Cash lists examples of the pattern including a free trade agreement in Colombia that benefited a donor with industrial interests there.

It also cites development projects in Haiti after their devastating 2010 earthquake, and a $1million payment to Bill Clinton made by a Canadian shareholder in the Keystone XL oil pipeline while it was being discussed by State Department officials.

I bet the corrupt media won’t say a peep about this book!