This is insane and Obama should be impeached for this! The job of the military is to kill people and break things—period! They’re not healthcare professionals! 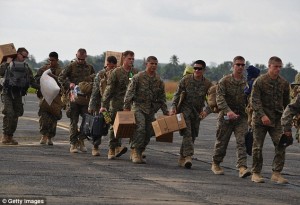 The serviceman at Fort Campbell and Fort Bragg are given swift instructions on how to protect themselves against the deadly virus by Army medical teams before deployment.

These include how to put on, remove and decontaminate protective equipment, as well as a practical test that aims to ensure soldiers understand the procedures.

It comes as the Ebola death toll has struck 4,546, bringing the total number of confirmed and suspected cases of the virus to 9,191.

During the four-hour hazmat training, a team of two can train as many as 50 soldiers, the United States Army Medical Research Institute of Infectious Diseases (USAMRIID) told The Daily Beast[3].

‘All training is tiered to the level of risk each person may encounter,’ said Caree Vander Linden, spokesman for USAMRIID, which is based out of Fort Detrick.

This decision to send troops to a Ebola deceased countries underscores just how much Obama hates the military!