Detroit: A Father Shoots His Own Son In Drive-By Shooting 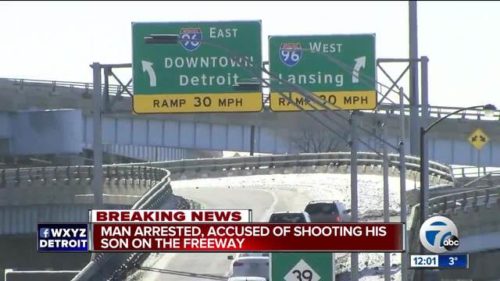 Friday morning around 8:15 AM, the eastbound lanes of I-96 in Detroit became the scene of a shootout between an estranged father and son. The two, who were driving separate cars, had been arguing back and forth via text message at the intersection of Schaefer and I-96. The 21 year old son eventually drove away onto the interstate highway, with his 45 year old father in pursuit. The man caught up to his son between Schaefer and Hubbell. They exchanged gunfire on the highway, though it is not clear who shot first.

The son was shot in his ribs, and drive himself to the hospital, Sinai Grace, where he is currently under arrest and under police guard. The father drove to the Detroit Police 2nd Precinct station and turned himself in. He is currently in custody. The Michigan State Police closed off a stretch of the freeway for an hour on Friday to facilitate a search for evidence related to the shooting.
The names of the father and son are being withheld due to formal charges which are pending.

Although no names have been released, clearly this is not a healthy family situation. Detroit, well known for a very high level of crime for many years, including gun violence, is no stranger to disputes becoming dangerous, and even lethal. The city, run 100% by Democrats for at least 60 years, has been in precipitous decline for decades. The public schools and the neighborhoods are in bad shape and getting worse. Families are torn apart, people are living in abject poverty, crime and drugs are rampant and gangs are thriving. Disputes are settled with guns far too often in the Motor City. Drugs are the self-medication of choice, and children often come from broken families. This father and son were estranged. And that is unfortunately not a rarity in this once proud city.

Until this community, and everyone the other urban community struggling with the same issues, takes control of its own values, pushes out the thieves and thugs and gangs and drugs, promotes and maintains intact families where there’s a mom and a dad married to each other to provide stability and oversight for children, nothing changes for Detroit, or Chicago, or New York, or Philadelphia, or Baltimore, or Los Angeles. A community cannot simply abandon the principles of healthy intact families and traditional child raising and then expect not to experience drastic consequences.

This father and son are an example of a culture that does not value the things that make for heathy communities. Detroit, it’s time to wake up and start returning to the traditional and good values of your great grandparents. They would be shocked at what is going on now. Your children are depending on you. Let’s build a city where fathers are not estranged from their sons and do not shoot them on the freeway, where differences are worked out with civility and concern for others. It’s time to step up, Motor City. Lives depend upon it.

Special Investigation Section and Metro South troopers will be closing the
the local lanes of westbound I-96 from the start of the local lane access to Schaefer. The express lanes will remain open. This will last approximately one hour pic.twitter.com/ywIU7zhhh7[2]