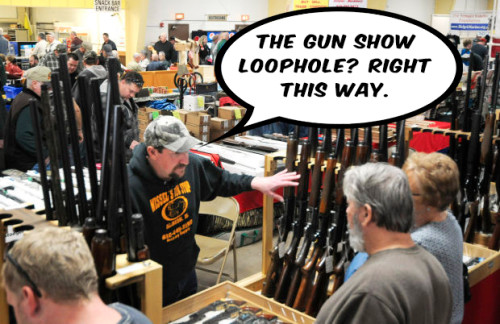 We’ve all heard our Liberal friends parrot back like good little followers, the words of their leaders in Hollywood and in the White House, that we “must close the gun show loophole”. [2]The only problem is that there isn’t one. So let’s do something about our Progressive neighbors and their uninformed opining and show them this video! The truth, though not quite as dramatic as the lies, is much more reasonable. What do you think of Crowder’s hilarious attempt to exploit this nonexistent loophole?

If you purchase a firearm from a federal firearms licensee (FFL) regardless of the location of the transaction — a gun store, a gun show, a gun dealer’s car trunk, etc. — that FFL must confirm that you are legally allowed to purchase that gun. That means the FFL must either run a background check on you via the federal NICS database, or confirm that you have passed a background check by examining your state-issued concealed carry permit or your government-issued purchase permit. There are zero exceptions to this federal requirement.

If an individual purchases a gun across state lines — from an individual or FFL which resides in a different state than the buyer — the buyer must undergo a background check, and the sale must be processed by an FFL in the buyer’s home state.”

Comedian Steven Crowder decided to put this to a test. He went to several gun shows with a hidden camera and attempted to buy a gun. It should have been easy for him considering Democrats like Obama and Hillary say that anyone, even criminals, can purchase a gun at these shows. Democrats would NEVER lie to the public, would they? Well, watch the video and find out.

Anyone who wants to buy a gun at a gun show will go through a Federally mandated background check. That’s just the way it is…no matter what the rabid anti-gun Left spews at us. They can’t get away with these lies, if we refuse to buy into them. Go ahead, make our day…enlighten a Liberal.