Did This Rubio Insult Of Trump Go Too Far?

Marco Rubio is the GOP establishment’s golden boy. They absolutely adore him ever since he tried to ram amnesty down the throats of the American public in 2013.

Now, Rubio is in full desperation mode as he is the talking puppet for the establishment and he’s trying to take out Donald Trump. Except, it’s not working and he’s only hurting the Republicans in the long run[1]. 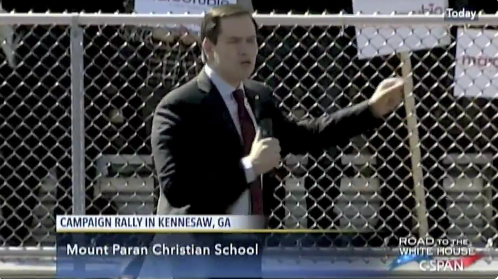 Rubio then turned toward a more serious public policy issue as he compared Trump to Kim Jong-un, the supreme leader of the Democratic People’s Republic of Korea.

“The world is become a very dangerous place. There is a lunatic in North Korea with nuclear weapons, and some would say a lunatic trying to get a hold of nuclear weapons in America, but that’s different.”

Rubio needs to get his toys and go home. He’s a child and he’s getting more and more pathetic by the day.

The establishment needs to accept that the American people do not want their candidate. They’d rather be good losers against Hillary Clinton, which is why they are pushing Rubio, than have a guy (Trump) that isn’t a puppet for them.