Did You Know Obama Just Took ANOTHER Executive Action On Immigration?

As if Obama’s crusade to prioritize illegals over Americans hasn’t tanked his approval ratings enough, Emperor Obama has tinkered with America’s immigration laws yet again, according to a report from the Washington Examiner.[1] 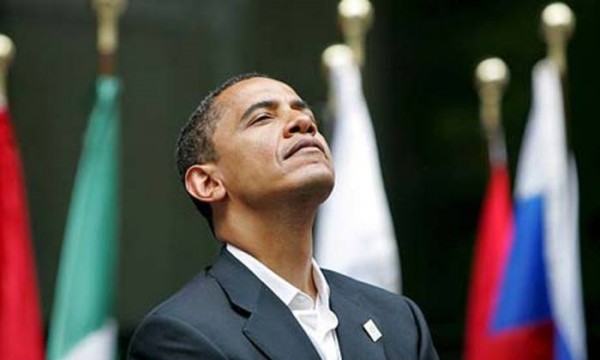 Obama intends to make it easier to bring more foreign guest workers to the United States — likely at significant cost to workers already here — by loosening the rules governing something known as the L-1B visa program. Under the program, a multinational company with offices in the United States can move workers from abroad to live and work in the U.S. for as long as five years in what is known as an intra-company transfer. There are almost no rules concerning what those workers can be paid, so there is no barrier to a company firing American employees and bringing in workers from foreign facilities to replace them at much lower pay.

Companies who transfer workers to the U.S. through an L-1B visa have to show that those workers bring some sort of “specialized knowledge” to the job — that is, they have particular knowledge that would be hard, if not impossible, to find elsewhere in the United States. Obama plans to broaden the definition of “specialized knowledge” so much that it could conceivably used to cover just about any foreign worker a company wants to bring here.

Companies transferring foreign workers to the U.S. have to make the case to an “adjudicator” from the United States Citizenship and Immigration Services. It’s not a terribly tough job; the definition of “specialized knowledge” was already pretty loose. In 2006, the Department of Homeland Security inspector general investigated L-1Bs and found that “the program allows for the transfer of workers with ‘specialized knowledge,’ but the term is so broadly defined that adjudicators believe they have little choice but to approve almost all petitions.” Standards were tightened somewhat after the study, but now Obama wants to loosen them again.

Also, under Obama’s new rules, Citizenship and Immigration Services adjudicators will not be able to consider whether or not there are American workers available to do the job when determining whether to grant an L-1B visa. “A petitioner is not required to demonstrate the lack of readily available workers to perform the relevant duties in the United States,” according to Obama’s proposal.

In addition, the president seeks to lower the bar by which Citizenship and Immigration Services adjudicators make an overall judgment on L-1B applications. An applicant, or petitioner, does not have to prove that there is a need for an L-1B worker. Instead, he just has to make a case that an adjudicator can decide is “probably” true. From the Obama rules: “Even if an officer has some doubt about a claim, the petitioner will have satisfied the standard of proof if it submits relevant, probative, and credible evidence…that leads to the conclusion that the claim is ‘more likely than not’ or ‘probably’ true.”

Some experts believe the new Obama rules — promised when the president announced his unilateral immigration overhaul last November — will lead to more abuse of a program that is already being abused. The few Americans who follow such topics have probably heard of the H-1B visa program that brings foreign workers to the United States, but even fewer have heard of the L-1B. “The L-1B is much worse than the H-1B program in terms of its impacts on American workers and the American economy,” says Ron Hira, a professor at Howard University who studies the immigration system. “There are no wage standards — foreign workers can be paid home country wages, which is $6,000 a year for an IT worker in India. American workers can be displaced by L-1B workers. There are no recruitment requirements and no educational requirements (the L-1B worker doesn’t even need a degree).”

Remember when we elected Barack Obama to serve as our emperor, empowered to make decisions affecting hundreds of millions without having the approval of Congress?