Fair warning: this story will make your blood boil!

If there is one thing our totalitarian government hates more than the Second Amendment, it is the presumption of innocence found in our concept of due process. According to a shocking report from the Blaze[1], a disabled Navy vet witnessed firsthand the government’s disdain for these compatible, constitutional concepts. 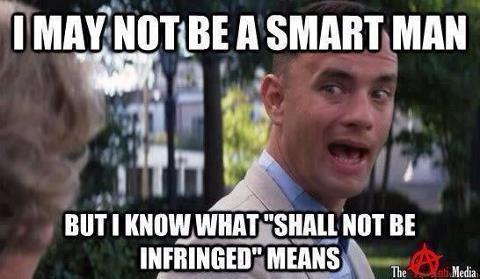 A disabled U.S. Navy veteran in Glendale, Arizona, is “devastated” after he says police confiscated 28 of his guns, valued at over $25,000, after a neighbor made “false” allegations that he threatened him.

Rick Bailey, a 56-year-old retired software systems engineer, told TheBlaze on Tuesday that he and his neighbor were engaged in a months-long dispute over his landscaping company. He said his neighbor would park two large, smelly “dump trucks” used for his business and other vehicles in the small cul-de-sac where they live.

Bailey said he eventually filed a complaint with the city and the neighbor was ordered to remove all dump trucks and other work-related equipment from the private residence. Though he initially complied with the city’s order, the veteran said his neighbor would sometimes bring the trucks back on some weekends, when the city was closed, “just to irritate us.”

After over two months of calm in January and February, the situation climaxed on March 16 after Bailey called police because he smelled what he thought were “toxic chemicals” coming from the neighbor’s property.

“I spend my days sitting out on my patio relaxing,” he told TheBlaze, explaining that he is severely disabled. “The smell got so bad, I had to come back to my patio and use my inhaler — so I called the police to see if anything could be done.”

When the police arrived, Bailey said he was told by police officers that the neighbor alleged he had threatened to “shoot” him, a claim he said was “bulls**t.”  The very next day, March 17, the neighbor told authorities that Bailey had threatened him and filed for an “injunction against harassment.”

Bailey said he’s been trained on firearms since he was a kid and fully understands the implications of threatening to “shoot” someone, even as a joke.

But the protective order doesn’t even appear to mention Bailey making any gun-related threats. The neighbor alleged that Bailey threatened to “stuff me in my dump truck,” demanded that he move his trucks, and told him to move his boat to the other side of his property, according to a copy of the neighbor’s injection petition…

Bailey denies threatening his neighbor. He also said he is physically incapable of harming the man due to his disability. Bailey said he was medically discharged from the Navy after four years of service due to a serious back injury. His condition eventually forced to retire from his job as well.

Still, a judge apparently found the neighbor’s allegations sufficient enough to not only issue the protective order, but to also order the confiscation of his 28 firearms. The judge attached a separate order directing officers to take Bailey’s guns and revoking his right to purchase firearms, according to documents obtained by TheBlaze.

Under “other orders,” the judge wrote: “Def shall not have/buy firearms, surrender any to Glendale PD.”

Bailey told TheBlaze the Glendale Police Department wasted no time, arriving at his house to confiscate his guns the same day the judge signed the order.

Glendale Police Department spokesman Sgt. David Vidaure confirmed to TheBlaze that police received the court order and acted on it by confiscating Bailey’s firearms. He said the police department did not play a role in the decision.

“I was totally devastated,” Bailey told TheBlaze. “I couldn’t believe something like this could happen. I had a 3-hour anxiety-slash-panic attack while officers were there and after they left. They wanted to call an ambulance.”

The Navy veteran intends to appeal the judge’s court orders and attempt to reclaim the confiscated firearm stash that took him over a decade to collect. A GoFundMe page[3] has since been started to raise money for legal fees in the case.

I suppose that’s all it takes to destroy a man’s constitutional protections; a case of “he said/she said” is good enough for police to be the deciders of who may and may not retain their civil rights.

This man thought his fighting days were over, but it seems he has to roll up his sleeves once more to fight his own government.