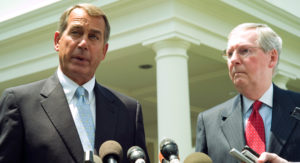 [1]“Y”? And the answer is gonna be because the United States entered into a collectivist trade agreement that restricts America from doing what is best for the country in favor of for what is best for the collective. And when they wonder when that happened, the first step was today when Rubber Stamp Gutles[2]s TraitorousRepublicans[3] gave American sovereignty away.

The Hill[4] reports The Senate on Tuesday voted to advance President Obama’s trade agendaapproving a measure to end debate on fast-track authority.
The 60-37 motion sets up a vote on final passage on Wednesday. If the Senate approves fast-track or trade promotion authority (TPA), it would then be sent to Obama’s desk to become law.
Fast-track authority would allow Obama to send trade deals to Congress for up-or-down votes. The White House wants the authority to conclude negotiations on a sweeping trans-Pacific trade deal.

The Democrats cast “yes” votes even though the trade package did not include a workers assistance program for people displaced by increased trade. The Trade Adjustment Assistance (TAA) program was a part of the last fast-track package approved by the Senate in May, but became a key part of opposition to the package among Democrats in the House.

To move fast-track forward, the White House and GOP leaders in both chambers decided to break TAA away from fast-track and to try to approve both in separate votes.