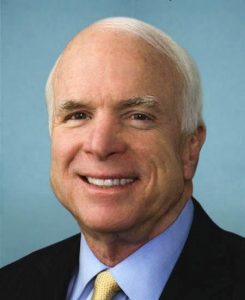 Former pathetic loser candidates Sen. John McCain seems like he doesn’t want to miss a chance to knock the Trump administration whenever the opportunity present itself. I think he’s still upset his boyfriend, Lindsey Graham, couldn’t get above 1% in the polls when he ran for the GOP nod against Trump. This is payback and it makes McCain a bum in my opinion!

McCain, the chairman of the Senate Armed Services Committee, praised Flynn’s “invaluable contributions in the fight against terrorism” in a written statement released hours after the retired Army lieutenant general resigned.

“At the same time, General Flynn’s resignation is a troubling indication of the dysfunction of the current national security apparatus,” the Arizona Republican said.