Disgraceful Lapdog Republicans rush vote on ObamaTrade before anyone reads it

Establishment Republica[1]ns[2] are nothing but a bunch 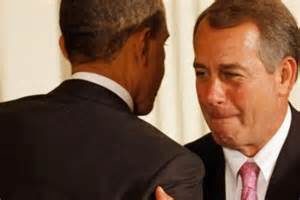 [3] of yellowbelly punks! We no longer have a two party system in America. We have the Democrat and the Democrat-lite Republicans who are afraid of their own shadows.

Politico[4] reports House leaders, confident but not yet certain they have the support to pass sweeping trade legislation, are aiming to bring the package to a floor vote by the end of this week — even as they rush to resolve a last-minute hangup over how to pay for aid for displaced workers.

The vote to grant President Barack Obama fast-track authority to negotiate a massive Pacific Rim trade deal will be extremely tight by all accounts. Senior aides and lawmakers in GOP leadership are intent on scheduling the vote at the moment they believe they have the votes locked up — ideally by Friday to spare supportive lawmakers the possibility of another weekend of attacks by trade foes back in their districts.

“We’re doing very well, we’re close,” Rep. Paul Ryan (R-Wis.), who’s been at the forefront of the GOP effort to round up support, said Tuesday of the current vote count. If Republicans want to bring the trade legislation to the floor Friday, they must decide Wednesday.

Still, the state of play remains fluid, GOP lawmakers and aides cautioned, and there’s a chance the vote will slide into next week.

Both parties are screwing the American people with a trade deal done in secret. How can this possibly be a good thing?