I really, really, really wonder[1] as of late what is wrong with people. Over 48,000 people tuned in on Facebook Live to watch three teens sexually assault a 23 year-old woman. She may have been mentally challenged. Haleigh Alexis Hudson, 19, Ezzie Johnson, 17, and Kadari Fabien Booker have all been arrested. The police expect to arrest more people as well. Hudson turned herself in… Johnson and Booker were arrested. Hudson and Booker face charges of felony kidnapping and sexual assault. Johnson faces a charge of felony kidnapping and will be charged as an adult. He did the filming at Hudson’s home.

Gulfport Police Chief Leonard Papania says he is extremely disturbed by the crime, but even more disturbed by the social media voyeurism over it. At 11:46 pm Tuesday, police officers responded to a report of an assault on the 3100 block of 7th Avenue and learned a woman was sexually and physically assaulted while being recorded on Facebook Live. The officers involved worked all night long to get warrants for Hudson and Johnson. There may be charges of abusing a vulnerable adult if the victim is mentally handicapped. 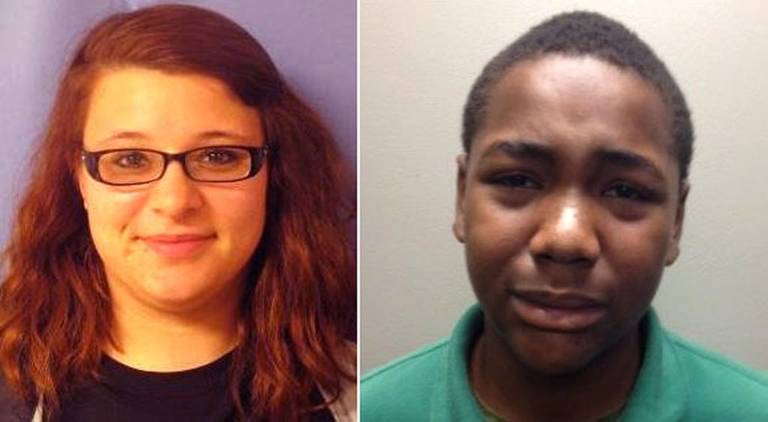 GULFPORT – Three people are now in custody in connection with viral video posted on Facebook Live that shows the sexual and physical assault of a woman are in police custody, according to the Gulfport Police Department

Haleigh Alexis Hudson, 19, turned herself into police around 7 p.m. Wednesday. She was arrested on charges of felony kidnapping and sexual assault.

Ezzie Johnson, 17, was arrested by police around 8 p.m. Wednesday. He faces a charge of felony kidnapping.

Kadari Fabien Booker was arrested by police about 10:44 p.m. Wednesday. He faces charges of felony kidnapping and sexual assault.

All three are being held at the Harrison County jail.

This is a piece of that video – it has been edited for content and does not show the sexual assault, but it does show how this poor woman was beaten and abused by these animals. WARNING: You may find this disturbing.

Of course the video went viral. It was eventually removed from Facebook, but a copy was posted Wednesday morning. That’s when thousands of people tuned in to watch sexual assault for the hell of it. Shame on them – Papania is right, this is the dark side of social media. “I can’t help but be disturbed by the incredible numbers of shares and views of this crude and despicable event,” Papania said. “We videotape pain and suffering, then we share it and then we view it over and over.” It’s sick and depraved. There seem to be a whole heck of a lot of people out there that are morally deficient these days.

This poor woman[3] was forced to perform oral sex. The beating above occurred just minutes after that. The victim is repeatedly beaten about the head as she cries while kneeling on the floor, as onlookers shout “don’t break it up.” There were definitely more than three attackers here. The 23 year-old victim’s nightmare allegedly began in the bathroom, where Johnson allegedly stood over the victim, filming her as he she performed oral sex on another man. A bunch of sick bastards watched, but eventually they left the bathroom and the door was closed.

After she was forced into that, the gang labeled her a prostitute. They started chanting for her to do it again. One guy asked her if she wanted to go home and she said she did. Hudson allegedly interrupted, saying: “She ain’t going home until her throat swells up,” the Clarion Ledger[4] reports. Then Hudson demanded that the victim fight her. That’s when the beating took place that is in the video.

Papania went on to say in response to complaints that the investigation and statement took too long, that they would do proper police work at the pace of the police department, not Facebook. Well put. The phones have been ringing off the hook at the police department and Papania thanked everyone for the huge amount of tips coming in. I would wager there will be a lot more to this case and further arrests are pending. Every one of these animals deserves to be thrown in a deep, dark pit forever over this.