In case you needed another thing to worry about in your life, apparently, worms can take-up residence in your eyes. One woman discovered that out the hard way and the video showing the live worm[1] is both disgusting and strangely entertaining. Check it out: 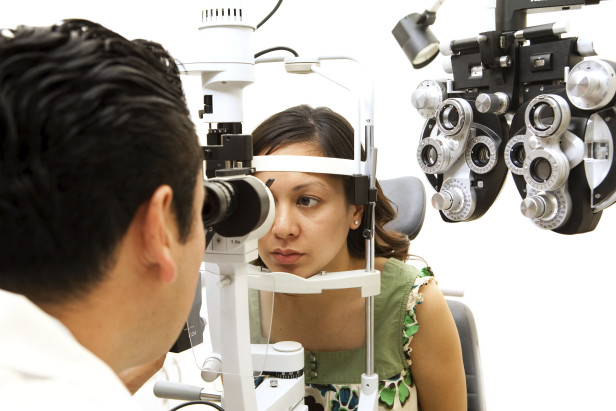 In the clip, the parasite twists and writhes as a doctor looks into the patient’s eye with a microscope.

The woman in the video is unidentified and it is unclear where the clip was filmed.

However the footage clearly shows the worm squirming in the bottom half of her iris before moving over her pupil.

The woman doesn’t appear to be in pain, and blinks as the doctor continues to inspect her eye.

The gruesome video was uploaded to LiveLeak.com today and has already been viewed by more than 18,000 people and racked up 200 comments.

One user wrote: ‘Great! Nightmares for me tonight.’

Another said: ‘I really need to see this thing removed or I won’t sleep tonight!’

Writing in the clip’s title, the user who uploaded in Australia says he has another video of the worm being removed.

‘I wasn’t sure if you wanted to see the treatment.. [it’s] not pleasant to look at,’ he said, asking users to vote on the matter.

The creature is known as a nematode, or roundworm, of which there are more than 15,000 known species.

While some species are microscopic, others can reach up to two metres in length.

Many types of roundworm can pass life-threatening disease to humans.

They are transmitted by eating meat that isn’t sufficiently cooked or through contact with faeces, or water contaminated with faeces from humans or animals.

Professor Mark Viney, a biologist specialising in nematode roundworms at the University of Bristol, explained that nematodes found in the eye are usually transmitted by insect.

He told MailOnline: ‘There are a whole bunch of nematodes that are transmitted by insect.

‘The person are bitten and the larvae of worms are injected in the bite.

‘They grow into adults which make their own young, and some of those young can travel through tissues and end up in the eye.’

In the video, he said the worm appears to be in the aqueous humour, the film of gelatinous fluid found in the space between the lens and the cornea.

‘The one in the video probably isn’t the adult, the adults are somewhere else in the body,’ he continued.

‘It can live in the eye because as a parasite it has evolved to live inside other animals and is very good at it.

In many parts of the world, parasitic infections of the eye are a major cause of blindness, according to the journal Current Opinion in Opthalmology.

Nematode infections of the eye are common in different parts of the world, but some are usually encountered only in developing nations, doctors write in another journal, Ophthalmology Clinics of North America.

In endemic areas, almost every person is infected and about half of the population is eventually blinded, they continued.

Infections are treated with antiparasitic drugs, surgery to remove the worm and interventions such as worming animals so their worm-ridden faeces cannot contaminate humans.

Though Americans should be significantly more worried about car accidents and heart disease, I would be less-than-honest if I claimed to not now be seriously concerned about worms infesting my eyes.

It may not be lethal, but it sure is creepy…