Walt Disney is, undoubtedly, rolling over in his grave as Disney betrays Americans. According to several reports[1], Disney parks have turned record profits, but are firing American workers so that they may use cheaper foreign workers. 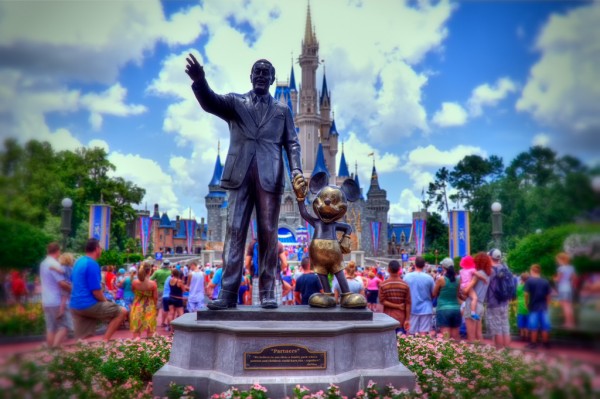 There was a lot to celebrate in the Magic Kingdom this year. The Disney Corporation had its most profitable year ever[3], with profits of $7.5 billion—up 22 percent from the previous year. Disney’s stock price is up approximately 150 percent over the past three years. These kinds of results have paid off handsomely for its CEO Bob Iger, who took home $46 million in compensation last year[4].

Disney prides itself on its recipe for “delighting customers,” a recipe it says includes putting employees first[5]. They tout this as a key to their success in creating “a culture where going the extra mile for customers comes naturally” for employees. One method of creating this culture is referring to its employees as “cast members.” In fact, Disney is so proud of its organizational culture that it’s even created an institute[6] to share its magic with other businesses (for a consulting fee, of course).

So, you would expect a firm that puts its employees first to share the vast prosperity that’s been created with the very employees who went above and beyond to help generate those record profits.

Well, how did Mr. Iger repay his workers—sorry, I mean cast members—for creating all this profit? Not with bonuses and a big raises. Instead, as the New York Times just detailed in a major report[7], he forced hundreds of them to train their own replacements—temporary foreign workers here on H-1B guestworker visas—before he laid them off.

What motivates a company to replace its American workers with H-1B guestworkers? One word: Profit. H-1B guestworkers are cheaper than American workers and don’t have much bargaining power, and any company would be foolish not to take advantage of this highly lucrative business model that has been inadvertently created by Congress and multiple presidential administrations.  Of course, this business model is paid for by destroying the livelihoods and dignity of tens of thousands of American workers. The costs are also borne by American taxpayers, through foregone tax revenue and the additional social services that need to be provided for those newly unemployed American workers.

When it comes to using the H-1B to cut costs, Disney is far from an isolated case. The Disney news comes on the heels of multiple reports of corporate layoffs with H-1B replacements, atSouthern California Edison[8], the Fossil Group[9] in Texas, Pfizer and Northeast Utilities[10] in Connecticut, Harley Davidson[11] in Milwaukee and Kansas[12], and Cargill[13] in Minnesota.

The full story of Disney’s injustice hasn’t yet come to light, because the company isn’t willing to speak about it, and displaced American workers are afraid to talk because they fear they won’t be hired elsewhere. Further, the Obama administration has refused[14] to investigate any of the recent listed H-1B abuse cases. We know that Disney hired HCL, a major India-based offshore outsourcing firm[15], to bring in its H-1B workers. Like its rivals Tata, Infosys, and Wipro, HCL is one of the top H-1B employers in America[16]. HCL is a publicly traded company, whose CEO Vineet Nayer once proclaimed that recent American graduates are “unemployable[17]” because they expect too much and are too expensive to train.

HCL was the sixth largest recipient of H-1B visas in fiscal year 2013, with the Obama administration approving 1,713 H-1B visas for its workers. Like most top H-1B employers, government data reveal that HCL uses the program for cheap, temporary labor rather than as bridge to permanent immigration. In fiscal 2013 it applied for only 128 green cards, compared to its 1,713 new H-1B workers, or 7 percent of the H-1Bs it hired that year (because H-1B visas are valid for up to six years, HCL’s total H-1B workforce is much larger, but it does not disclose this information).

According to government data acquired through a Freedom of Information Act request, the median wage HCL paid those 1,713 H-1B workers was $61,984, which is essentially the entry level wage for an information technology (IT) worker, and more importantly, a 25 percent discount on the median wage of $82,710 for Computer Systems Analysts[18] in the United States. Moreover, it’s almost certain that Disney’s 25 percent H-1B discount is an understatement, because many of the laid off Disney workers I spoke with were earning approximately $100,000, and had been employed there for many years, so they had also earned and accumulated benefits packages based on their seniority.

It’s important to point out that Disney is not an outlier, it’s the norm. Loopholes in the H-1B program make it irresistible to corporations, whose sole goal has become to maximize profits and shareholder value. Appealing to patriotism, corporate social responsibility, or even a sense of moral decency is a fool’s game. If you don’t believe me, look no further than Disney, whichbrags about its awards for its corporate social responsibility[19].

We may not like it but in the contemporary U.S. business environment, ten out of ten corporate executives will choose to replace Americans with cheaper guestworkers—it would be a dereliction of their fiduciary duty to shareholders if they failed to take advantage of this. Congress, the president, and the Departments of Labor and Homeland Security should not sit idly by while this happens. They should reform the program so it can’t be used to undercut American workers and exploit foreign workers[20].

Few can blame Disney for wanting to maximize profits, but there simply must be reforms in place that prioritizes American workers over guest workers. Shame on Disney, but more aptly, shame on Congress.