Do we have Free Speech and Religious Liberty in America?; Stockton Police Lt. Toby Will Placed on Leave After Sending Pro Traditional Normal Marriage Letter to Local Paper 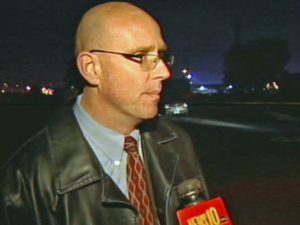 [1]That’s right, traditional normal marriage! I don’t give a rip what SCOTUS believes. Same sex marriage may be the law of the land, but that means very little in the eyes of God and I have every right to say it and believe it.

NBC News[2] reports a high-ranking California police lieutenant has been placed on leave after he sent a newspaper a letter condemning the legalization of same-sex marriage nationwide. He signed the letter with his rank and employer — and the newspaper editor says that’s how he wanted it to appear in print.

In a letter[3] to the editor of the Stockton Record, Stockton Police Lt. Toby Will called legal same-sex marriage “blatant debauchery.” The letter, titled “Marriage ruling shuns God,” was posted online on July 7.

The Stockton Record then printed an article headlined “Cop’s letter sparks concern[4].” It quoted police spokesman Joe Silva as saying Will “does not speak for the Police Department, and regarding his use of his police position, it is under administrative review.”

Silva told NBC News that Will was officially placed on paid administrative leave on July 13, pending the outcome of the review.

The following day, the editor of the paper, Mike Klocke, wrote a lengthy response [5]to questions the paper had received about printing the letter. He said Will was adamant that he wanted his official title to be printed if the letter was published.

Police chief Eric Jones told NBC affiliate KCRA [6]that part of the investigation into Will’s actions while he is on leave will focus on whether the lieutenant purposefully misrepresented the view of the entire department “because of the indication that it may have purported that it was the statement of the police department.”

That’s a bunch of garbage! What is there to investigate? The man was giving his opinion based on his religious beliefs. A 5 year old could determine that he was not speaking for the police department. He was only identifying himself as a real individual as opposed to people making up a phony handle or listing themselves as anonymous. Either we have free speech and religious liberty in America or not? That is the issue and I don’t see anything he did wrong for having a thought contrary to the Liberal point of view.